Book Review: The Story of Reality 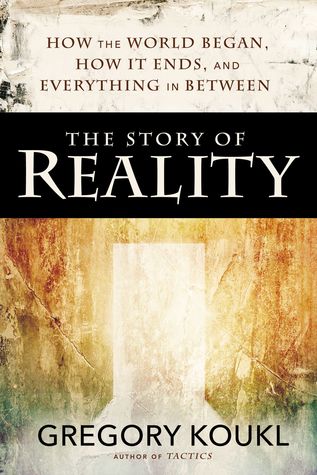 From the preface: THE FIRST QUESTION any of us learns to ask about anything—and we usually learn to ask it quite early in life—is “Why?” Children ask it incessantly about all sorts of things. We usually don’t mind because we know their questions generally have answers, and in many cases (with the easier questions) we know what the answers are. Put simply, there are reasons for the way things are, and it’s the most natural thing in the world for us to try to figure out what those reasons might be. It’s one of the first things we learn.

First sentence of chapter one: I WANT TO TELL YOU the story about how the world began, how the world ends, and everything deeply important that happens in between. It’s a tale many already know but few understand, even those who call the Story their own. This story is not a fairy tale, but rather it is the Story all fairy tales are really about.

He writes, "Every religion tells a story of reality. Every philosophy and every individual outlook on life is a take on the way someone thinks the world actually is. There is no escaping it. These stories are meant to bring order to our beliefs, to explain the “pieces” of reality we encounter in life, whether big things or little things, important or inconsequential. All worldviews are not equal, though. Some have pieces that seem to fit together (internally) better than others, and some have pieces that seem to fit reality (externally) better than others."

He continues, "EVERY WORLDVIEW HAS FOUR ELEMENTS. They help us understand how the parts of a person’s worldview story fit together. These four parts are called creation, fall, redemption, and restoration. Creation tells us how things began, where everything came from (including us), the reason for our origins, and what ultimate reality is like. Fall describes the problem (since we all know something has gone wrong with the world). Redemption gives us the solution, the way to fix what went wrong. Restoration describes what the world would look like once the repair takes place."

He concludes, "Christianity is the Story of how the world began, why the world is the way it is, what role we play in the drama, and how all the plotlines of the Story are resolved in the end."

Koukl takes questions seriously. He doesn't answer condescendingly, in my opinion, but earnestly and logically. He knows that people--skeptics, agnostics, atheists, even believers--have questions, and that these questions should be thoughtfully, carefully considered before being answered.

My thoughts: The book is clear, logical, thoughtful. I LOVE how basic and yet thorough it is. I love the imagery of piecing together a puzzle. I think this image works throughout the book. I love that the key to 'getting' what Christianity is all about is knowing and perhaps remembering the big picture of the Bible. I love, love, love this one. I think it's worth reading several times at least.

Why you should read this book: "CHRISTIANS HAVE A PROBLEM when they fail to understand their own Story. They are not able to answer the two objections most frequently raised about their beliefs. These two obstacles are so daunting for nonbelievers, they simply cannot take the Christian Story as anything more than an implausible tale, like yarns about unicorns, leprechauns, or North Pole elves. Here are the obstacles. It is clear to most people that the world is not the way it ought to be. Something has gone terribly wrong, and everybody knows it. That’s the first part of the first obstacle. The second part is this. If there were a God, and if he really were good, and if he really were powerful, then the world would be a different kind of place than the one we find."


Puzzles are a good way to think about worldviews since they are made up of lots of individual pieces too. When the pieces are fit together properly, you’re able to see the big picture clearly. Of course, to get the picture precisely right you have to work with all the right pieces. For example, God and Jesus and Moses and the Law and grace and the cross and faith (and a whole bunch of other things) are all important pieces of the Christian puzzle. Dump a puzzle box at your feet and you’ll see what the Christian puzzle looks like for most believers. It’s a pile of pieces. They’ve never put the pieces of their puzzle together in an orderly way allowing them to see the big picture. As a result, they do not know if they are missing important pieces. They also do not know if there are pieces of other puzzles—bits of other worldviews—mixed in by accident that don’t fit into their picture. Or they might get confused when other worldviews take some of the Christian pieces and try to fit them into their own worldview pictures. Pieces from one puzzle usually cannot be mixed with pieces of another because they are made for different pictures. You can’t take, for example, the unique value of human beings (a central piece of the biblical worldview and the foundation for human rights) and force fit it into the Hindu worldview. It will not work. There is no place for it to fit. They are different puzzles with different pieces. In the same way, reincarnation makes sense in Hinduism but not in Christianity. Again, there is no place in the biblical view for that puzzle piece to fit. It’s like trying to put a carburetor on a computer. Both problems (missing pieces and wrong pieces) make it difficult for Christians (or anyone else, for that matter) to put the puzzle of Christianity together correctly.

Confused talking leads to confused thinking. Some beliefs are true. Others are not. The difference matters. If a story is not accurate to reality, it’s not any kind of truth at all, so it can never be my truth or your truth, even though we may believe it. It can only be our delusion, or our mistake, or our error, or whatever else you may want to call it. But it could never be our “truth.” I hope that’s clear. This your-truth-my-truth move is just a less direct way of asserting there is no Story, only a bunch of individual stories with none any more reliable than the other, and we’ve already seen that this approach is not going to work.

A man once told me I was probably one of those bigoted people who thought 90% of the world was wrong about their religion. I agreed with the 90% part, but I told him it had more to do with math than with bigotry. Think about this. Some religions teach Jesus is the Son of God and others deny it. Fair enough. But is it not clear that somebody is right and somebody is wrong on that score? There is simply no getting around it. The great monotheistic faiths understand God as a distinct, individual person, whereas some Eastern religions see God as the impersonal sum of everything all put together. Is it not clear that, if there is a God, both of these notions cannot be true about him at the same time? Clearly, massive numbers of people are mistaken on one side of this issue or the other.1 When anyone dies, they might go to heaven, or they might go to hell, or they might be reincarnated, or they might disappear into nothing at all. But even a child can see they cannot do them all at the same time. Multitudes—the majority even—must be mistaken. Again, that’s not bigotry. It’s simple math.

So let me give you the backbone—the plot line—of the Christian Story. It tells the most important things that happen in the order they take place and consists of five words: God, man, Jesus, cross, resurrection (here I mean the final resurrection at the very end of the Story).

There is a God, and we are not him, and pushing him off of his throne and taking it for ourselves is foolish. It is also dangerous.

I nabbed this title when it was on sale recently. Your review makes me want to read it ASAP.