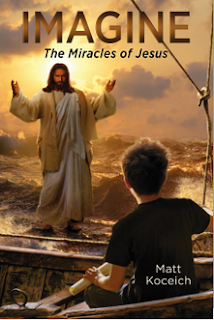 First sentence: No light. No sound...except for the beat of his heart.

Premise/plot: John Le is on his flight back home. He's dreading it...big time. His father isn't such a nice guy. His home has a lot of stress, tension, discomfort. When the plane encounters turbulence due to a storm, John flees to the bathroom where he finds a strange note. In a flash, it seems, John finds himself far from home--and in Bible land. He's in a BOAT of all places, fishing with Jesus and his disciples. Jesus has a special message for him, John Le. Jesus also has a super-big hug for him. Will being with Jesus in Bible Land make John be the stuff of dreams or nightmares?

My thoughts: Imagine...the Miracles of Jesus, in my humble opinion, is strongly influenced by The Twilight Zone. If I approach this children's book with that in mind, with the voice of that narrator, I find I like it better. John Le is on a TRIP. And it's a strange, disorienting, odd, crazy, over-the-top TRIP. He'll be chased by a dragon, a snake, a lion, a lying man, a demon masquerading as an angel of light, a 'thief' wearing his own face, etc. John Le finds Jesus--or Jesus finds John Le--in between some truly discomforting encounters.

Jesus gave John a hug and told him a second time not to worry. "I am calling you to do great things. There is an enemy that will try and stop you. He will come at you in different ways. Don't worry about anything. Say no, and trust that I am with you. Stand up, and with My power you will defeat his plans!"


"Precious child, I need you to know that in My eyes, you are a miracle too. Please have faith that what I say is true. While you are in the world, the dragon will always be there in the shadows lurking. But he has no power over you, John Le."

John Le does have to return to a reality, a reality where his father does not believe in Jesus Christ as his Lord and Savior.

I definitely liked this one a bit better than the previous title in the series that I read earlier in the week.

This one felt like a nightmare and not an attempt at a fantasy novel. If that was the intent, then it succeeded. If it wasn't the intent, well, I guess the series probably isn't for me. Nightmares have their own crazy logic and vague-fuzzy segues. When you're dreaming...you go with the flow. It's only when you're awake that you realize how weird or bizarre it really was. Emotions matter more than being realistic.