55. The Story Behind the Bible: The Prophets (NOT Recommended) 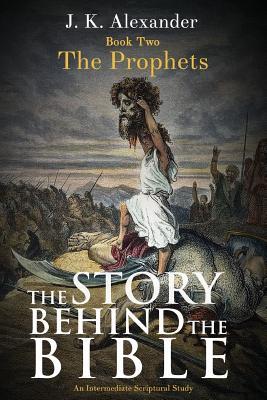 First sentence: The journey now continues through The Story Behind the Bible as we move forward from the fundamentals and foundational books of Moses, the Torah, to the rest of the Tanakh, or Old Testament.

Last week I reviewed the first book in J.K. Alexander's trilogy, The Story Behind the Bible: The Torah. Long story short, I do NOT recommend these two. I review not because these books are great sources of information, but because they are sources of misinformation. Also because I'm stubborn.

I used a few analogies last week that still apply. I might add one of skating on thin ice. There are portions of this book--whole pages in a row--that appears to be a bit thicker, more solid to skate on. But thin ice (aka DANGEROUS theology) is always lurking. Don't be lured into a false sense of security just because he's written whole paragraphs, most of a chapter even without red alerts going off.

So what is his goal for writing, that's a nice place to start off, "My hope is that this book, though somewhat extended by necessity, is nonetheless condensed and readable enough for readers to get a very good sense of the actual flow and formal of this large collection of ancient writings. There is a logic to it and readers will always have a good grasp of the canonization if they read straight through the chapters of this book from start to finish. I promise that the Bible is never misquoted and we will hit as many of the preeminent prophecies and concepts as possible along the way."

So long as he promises that the Bible is never misquoted....hmmm...we'll see if he lives up to that boast.

"True enthusiasts of the Bible are not typical but rather quite rare."

That, I'd believe of the general population. I think Bible teachers and preachers might be the exception--I'm thinking John Piper, John MacArthur, Steve Lawson, R.C. Sproul, Robert Godfrey, etc. But it is rare, I think, to find people who daily read the Scriptures and read through all the Scriptures regularly and consistently.

Back to his stated goal in writing, "This is a designated as an intermediate study and was written primarily with the more motivated and open-minded seekers and better informed scholars in mind."

I get the impression he's trying to flatter his intended reader.

Here's where it gets a bit scary if you're a Berean, "One of my hopes is that current and future pastors and ministers will embrace and benefit greatly from the historical and biblical research contained herein, but those who are determined to hold to old time religion or even turn of the last century scholarship will likely not be greatly inspired by these pages. I would ask those already well studied in the Bible to keep a particularly open mind and reserve judgment on the less conventional concepts and biblical interpretations until they read to the end and see how the whole picture turns out. It is for the congregations I plead."

And just when you thought he couldn't get much scarier, "So set your Bible aside along with traditional points of view for just a few days, open your mind very wide, and take the plunge."

So part of this book is Alexander walking readers through the contents of Joshua through Malachi. This is done somewhat unevenly. For example, almost all of what he says about 1 Samuel focuses on Saul's encounter with Samuel's spirit and the witch/medium. Some books receive an almost chapter by chapter summary. Other books are lucky to get two or three paragraphs. But he has something to say about every book. It is also interesting that he spends about as much time theorizing on the contents of Jasher than some of the books in the canon. He has a whole section of Shamanism. A whole section. And the afterlife. His section on the Zoi was truly bizarre and just out there out there. (UFO stuff) And he ends with how law and grace are not really separate and distinct from each other. He hints that he's not on the same page as Paul. Or in other words, he is right and Paul has been misunderstood and misinterpreted wrongly since the minute he finished writing his texts.

Here are some quotes:

The main underlying thread of the book of Judges is, in my opinion, largely misconstrued by some purveyors of religion. Many teach that this was a dark, dark time in Israel's history because there was no king in Israel, and the people did evil in the sight of the Lord. But worst of all, from the traditional point of view, God forbid, "Each man did that which was right in his own eyes." Unfortunately, I must strongly disagree with this interpretation."


He continues, "Not a dark time. These were actually glory days, and this was the first and only small preview model of what God wanted Israel to be like in the future...The sense I get from the story is that God was actually enjoying the time of the judges, though not the people's backsliding, but that was never going to change anyway, as clearly foretold in the second song of Moses."

"What I'm trying to break to you gently is what Yeshua (Jesus) told His followers, and even they did not seem to fully understand. We are the gods. The entities that quicken the flesh and blood bodies of mortal man and woman are powerful, beautiful, angelic entities that have lived for eons, were created to inhabit and maintain the earth, and who sang for joy in the presence of God when the earth was first fully formed."

"Long ago, we lived angelic lives, learned, and prospered in the first age of this world until the fall of Lucifer and the falling away of those who followed him. Afterward, the angelic wars ensued and God had to directly intervene to stop the madness. God was and still is angry about this and, after brooding awhile, decided that an age of mortality, purification, maturation, and redemption were in order and would be conducted mainly in the relatively safe confines of the physical realm. We all were created by God untold ages ago and there is a divine requirement in this age to be born of woman and live a single mortal in order to glean all the unique experiences of mortal creatures and to hardwire those experiences and higher thoughts and insights they engender into our angelic minds. The hub around which that process revolves is the salvation through Yeshua the Christ. So that takes care of the biblical perspective on where we come from."


I am not making this stuff up. (Though he is.)

"We don't receive our final reward when we die. After mortal death, there is still a good way to go before we work back to angelic immortality. But remember this is God we are talking about in the Bible. Though this is training and redemption, the entire journey holds intrigue, adventures, pleasures, challenges, and rewards enough for many mortal lifetimes."


"So now with no mortal fear and a lot of traditionally messed up theology straightened out, we can go forward, hopefully, with our study of the prophets with a much clearer understanding and peace of mind about where we are headed. And when you look at your neighbor, you should understand that whether you consider him a godsend or are certain he is Satan's right hand man, both you and he are already on the right track and have done at least one huge thing according to God's will. You both are making the required mortal journey. And even if you or your neighbor were Lucifer's first lieutenant during the first age destruction, if you complete the mortal journey, become faithful to Yeshua, and learn the grace and peace of Christ, you and/or your neighbor will be singing and feasting with the sons and daughters of God in His future kingdom."


"He knew Jeremiah before he was formed in the belly because Jeremiah had an immortal existence prior to his mortal birth just as we all did and just as Jesus had an eternal prior existence. Evidently Jeremiah was a good, faithful, and powerful immortal in the first age of the world and God would use him for special purposes in this mortal life as well."


"I am of the assumption that if the majority of people living in America, Britain, Scandinavia, etc. were awakened to the fact that they are not Gentiles but are in fact Israelites of Hebraic descent, they would embrace their rediscovered heritage and want to learn and experience their ancient culture. All or at least most of those peoples embrace their roots to the point of wanting to return to the land of their fathers regularly to observe and celebrate on a national scale the feasts of Yah'vah and His Sabbaths, the Passover, etc., and to tabernacle with Yah and their Jewish kindred awhile as often as possible."