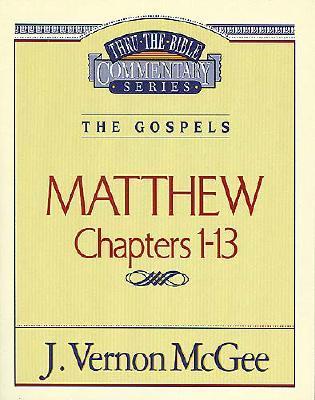 First sentence: The Gospel According to Matthew Introduction The Gospel of Matthew, although it is only twenty-eight chapters long, is a very important book. In fact, Genesis and Matthew are the two key books of the Bible.

I am reading the Bible in 2020 using the daily M'Cheyne (Robert Murray M'Cheyne) plan. I thought it would add a layer of substance to in addition to the four chapters a day, to also read commentaries for those chapters. For that I am using Matthew Henry's Commentary on the Whole Bible. But the plan goes through the New Testament (and Psalms, I believe) twice. So now that I've finished Henry's commentary for the New Testament, I am tackling the New Testament commentary section of J. Vernon McGee's series.

This is not my first time reading J. Vernon McGee. I've read twelve or so of his commentaries. Overall, I like his laidback, casual, straightforward, tell it like it is approach to teaching Scripture. There is something so grounded and down to earth about him. Each reader is "his" friend. It's hard not to feel like he is a friend too.


My friend, there is a danger of just wanting the information and the knowledge from the Bible but failing to translate it into shoe leather, not letting it become part of our lives. Through study we can learn the basic facts of Scripture, and all the theological truth contained in it, without allowing the Word of God to take possession of our hearts.


There is still a crying out today from a world that needs a Deliverer. The religious man needs Christ and not religion. The man of power needs a Savior who has the power to save him. The thinking man needs One who can meet all his mental and spiritual needs. And certainly the wretched man needs to know about a Savior who not only can save him but build him up so that he can live for God.

“Repent” is an expression that always has been given to God’s people as a challenge to turn around. “Repent” in the original Greek is metanoia, meaning “to change your mind.” You are going in one direction; turn around and go in another direction. Repentance is primarily, I think, for saved people, that is, for God’s people in any age. They are the ones who, when they become cold and indifferent, are to turn. That was the message to the seven churches of Asia Minor in Revelation 2 and 3, and it was the message of the Lord Jesus Himself. Someone may ask whether the unsaved man is supposed to repent. The unsaved man is told that he is to believe on the Lord Jesus Christ. That was the message of Paul to the jailer at Philippi (see Acts 16:31). That old rascal needed to do some repenting; but when an unsaved man believes in Jesus, he is repenting. Faith means to turn to Christ, and when you turn to Christ, you must also turn from something. If you don’t turn from something, then you aren’t really turning to Christ. So repentance is really a part of believing, but the primary message that should be given to the lost today is that they should believe in the Lord Jesus Christ. We like to see folk come forward in a service to receive Christ or sign a card signifying that they have made that decision, but the important thing is to trust Christ as your Savior, and if you really turn to Him, you turn from something else.

Every time His answer was, “It is written.” Oh, my friend, if only we were more adept at using the sword of the Spirit! It is our weapon in this day, and it is a very effective weapon.

McGee on the Sermon on the Mount:

There are two things I would like to say by way of introduction to this section. One is that the far right and the far left are not confined to politics, but among theologians who expound Scripture we also have the far left and the far right. This is vividly revealed in the understanding of the Sermon on the Mount. The liberal theologian is to the far left. He treats the Sermon on the Mount as the gospel, the Good News. He acts (even if he doesn’t say it) as if it were the only important part of Scripture.


“Therefore all things whatsoever ye would that men should do to you, do ye even so to them: for this is the law and the prophets.” To say that this is all the Bible you need may sound good, but it is pious drivel. The question is not whether you feel that the Sermon on the Mount is your religion. The question is: Are you living it? That is the important thing, and we’ll have more to say about that later.


There is also the extreme right point of view. This group treats the Sermon on the Mount as if it were the bubonic plague. They have nothing to do with it.


What you have in the Sermon on the Mount is a marvelous electric light bulb, but you do not have the generator that produces the power that will make the light.


The Sermon on the Mount needs to be preached to bring conviction to the hearts of men. This document lets men know that they have sinned, and it reveals that none are righteous and that all have come short of God’s glory. The Christian can take the principles set down in the Sermon on the Mount and consider them in the light of other Scriptures. This will provide a wider view and a better understanding of the mind of Christ.


It is well to note that they are be-atitudes, not do-attitudes. They state what the subjects of the kingdom are—they are the type of person described in the Beatitudes.


The Sermon on the Mount ought to drive you to the cross of Christ where you cry out for mercy. To do that is to honor the Law, my friend. Don’t try to kid me into thinking that you are keeping it. I know you’re not—because you are just like I am.

We are commanded to love all believers, and we express our love to our enemies by getting the gospel to them, giving them the message of God’s saving grace that is able to bring them to heaven.

As someone has said, Today is the tomorrow that we worried about yesterday. How true that is for many of us!

To judge can mean “to decide, to distinguish, to condemn, to avenge,” and it actually can mean “to damn.” These verses do not mean that a child of God is forbidden to judge others, but it does mean that we are not to judge the inward motives of others in the sense of condemning them. We do not know or understand why a brother in Christ does a certain thing.

you and I need to recognize that we have nothing worthwhile to say unless it is with the authority of the Word of God and unless we believe it is the Word of God.

What we ask is not always the Lord’s will, friend. But if it is His will, He can do it. It is most important that the will of God comes first. It may be easy for you, but it is difficult for me to put the will of God first. I put it like this, “Lord, will You do this because I want You to do it?” But the leper says, “I know You can, but will You?” That is, is it according to Your will? This is a little different from what we hear folk pray today when they demand that the Lord do certain things. May I say to you, friend, let Him decide—and that’s the way it is going to be done anyway.

My friend, sin is too heavy for you to carry—you’ll really get a hernia if you try to carry your load of sin! The only place in the world to put that burden is at the cross of Christ. He bore it for you, and He invites you to come and bring your burden of sin to Him. He can forgive you because on the cross He bore the burden of your sin.

There is no sin committed yesterday that the Lord would not forgive today because He died for all sin. The Holy Spirit came into the world to make real the salvation of Christ to the hearts of men. If you resist the working of the Spirit of God when He speaks to you, my friend, there is no forgiveness, of course.

My friend, you can quit doing many things, but that won’t make you a Christian. If everyone in the world would quit sinning right now, there wouldn’t be any more Christians in the next minute or in the next day, because quitting sin doesn’t make Christians.