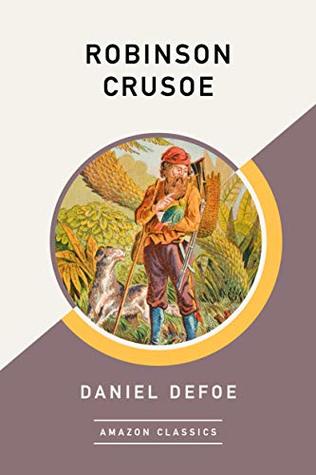 Robinson Crusoe. Daniel Defoe. 1719/2019. AmazonClassics. 571 pages. [Source: Bought]
First sentence: I was born in the year 1632, in the city of York, of a good family, though not of that country, my father being a foreigner of Bremen, who settled first at Hull: he got a good estate by merchandise, and leaving off his trade, lived afterwards at York, from whence he had married my mother, whose relations were named Robinson, a very good family in that country, and from whom I was called Robinson Kreutznaer; but by the usual corruption of words in England, we are now called, nay we call ourselves, and write our name Crusoe, and so my companions always called me.
Robinson Crusoe against the advice of his dear old mother and father leaves home to sail the world and find adventure. What he finds is misfortune--and fortune. I would say his fortune comes at a price--twenty something years deserted on an island that is sometimes visited by cannibals. He spends many of those years alone--unless you count goats, birds, turtles. He also spends much time in the Bible--I believe this is the only book he has with him on the island. He makes much of the Book and the Book makes much of him. While he's "waiting" for rescue, he's not idle. He's busy, busy, busy making his island work for him. Eventually he's aided by Friday, a native whom he rescues from the cannibals, and his first convert to the faith.
AFTER HE LEAVES THE ISLAND that should have been the end of the story. THE END. THAT'S ALL FOLKS. But nope, Defoe gives us sequels. Pointless, needless sequels. Which is all well and good if you *know* ahead of time that the edition you are reading contains the sequels. I don't know if this AmazonClassics contains both sequels or just one. It felt like a HUNDRED.
We're briefly told he returns to England, marries a wife (who dies at some point, do we even learn her name or anything about her???), has a couple of children (again do we even learn a thing about them?), and decides to have MORE ADVENTURES. He's off to travel the WORLD. He starts off traveling with a nephew who's a captain on a ship. They have a couple of close calls, but, mainly avoid catastrophes.
It felt like there were hundreds of pages focused on updating readers of what had been happening on the island after his rescue. (He'd left several sailors that had mutinied and I believe another group of sailors that had been shipwrecked on a nearby island. Friday's father was also now on this island.) IN MINUTE DETAIL we hear of every thing that occurred on this island no matter how insignificant or irrelevant to carrying any plot forward. Eventually we're brought back up to the current day--he's brought some women to be wives and other supplies. And a priest. So everyone can be properly married.
The only enjoyable part was when the nephew's crew THREATENED TO MUTINY if Robinson Crusoe was not put off the ship on shore somewhere--they were sailing in Asia by this point. Why???? Because he  talked religion night and day, day and night. Forever and ever, without respite. He had a one track mind and no one wanted to be near him. I was like I HEAR YOU. I WANT HIM TO BE QUIET TOO.
The last bit of the novel has him traveling by ship and on land through Asia and then back overland to Europe.
Did I mention that this AmazonClassic edition DID NOT HAVE CHAPTERS????  I think if I'd read an edition WITH CHAPTERS and that just contained the first book...I'd have enjoyed it a thousand times more.
© Becky Laney of Operation Actually Read Bible
Posted by Becky at 4:08 PM