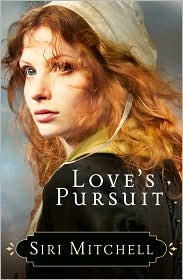 Poor Puritans. They hardly ever get a good rep in fiction. In Love's Pursuit, readers meet a community of Puritans (Stoneybrooke Towne) living in Massachusetts Bay Colony in the 1640s. More specifically we meet two sisters, Susannah and Mary Phillips. We also meet a woman who wears a cloak of invisibility. (Well, she wears her shame and humiliation as a cloak of invisibility.) Susannah is in love with a man, John Prescotte. But he hasn't proposed yet. And he may never get the chance.

Susannah is a beautiful young woman, and there are other men in town--including a visiting Captain (Daniel Holcombe)--that have noticed just how beautiful and wonderful she is. One of her would-be suitors is Simeon Wright a well-respected man in Stoneybrooke. A man who could have his pick of many of the young ladies in town. They all think he's swoon-worthy. Take for example Susannah's own sister, Mary. Mary thinks that Simeon Wright would make a fine husband...for herself. But when Simeon proposes to Susannah instead, then things begin to crumble for Susannah. She does not love Simeon. She loves John. She doesn't appreciate the fact that Mary is angry with her because he proposed to the 'wrong' sister. Susannah doesn't want to wear any blame there. She didn't "steal" him from her because she doesn't want him!

Despite the fact that her father did NOT consent to his proposal--accepting on his daughter's behalf--the Wrights have the banns published in church. An unfortunate event since John had just days before proposed to Susannah with the blessings of both families. But with the announcement that she's to marry Simeon being read publicly in the church assembly, John Prescotte withdraws his offer of marriage and shuns her. Since John is now refusing to marry her, what choice does Susannah have but to marry Simeon? Other than every bone in her body telling her that Simeon is the wrong man for her, that he is not a good man, period, she has no "logical" reason to refuse her father's request to marry Simeon. The captain sure has a few ideas of how to fix the matter. But will she listen to him? There are a few in town who could warn Susannah about Simeon. A few who could tell her that he is not what he seems. That beneath the surface, he's hiding some cruel tendencies. It's looking like they'll never be a happily ever after for Susannah...no matter what she decides.

I'm not sure I "liked" this one. The narration was first person. But here's the odd bit, it had multiple narrators. Each narrator spoke in the first person. And there was no clear separation marking who was speaking. I think if this had been indicated somehow (it is possible, I've seen other books do it) it would have been an easier read. Readers just have to piece together for themselves the narration the best they can. I do think it gets easier as it goes on. But those first few chapters are a bit rough because things are just beginning to unfold.


I do think the book was a little harsh with the Puritan angle. Using the equation that Puritans are bad and evil meant that for our heroine to have any chance to be happy, she has to be outcast and shunned and cut off from her community.

© Becky Laney of Operation Actually Read Bible
Posted by Becky at 9:45 AM