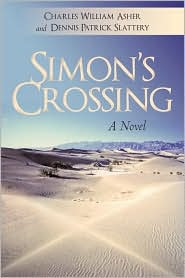 Simon's Crossing. Charles William Asher. Dennis Patrick Slattery. 2010. January 2010. iUniverse. 172 pages.
A life can be a river or a still pond. The river chose me. When? I'm not sure. I cannot measure in years the beginnings or endings of my life story any more than I can trace the origins of the stream that fed our well that morning when the Roman soldiers first appeared. However, I became this man, Simon of Cyrene, referred to in Mark's gospel, and I know I'm no longer the man I used to be. How could I be after the Roman soldiers returned that very same night, out of the deep darkness, to tear our lives apart forever?
Simon's Crossing is a fictional account of Simon of Cyrene, the man who carried Jesus' cross. We know very little about the man. We know his name. We know the name of two of his children, Rufus and Alexander.
Asher and Slattery have created a dramatic story, rich in detail, to give readers a firsthand account of what it might have been like to witness the crucifixion. Most of the novel takes place on that one day, on that very slow walk to Golgotha. With each step, Simon struggles--not just physically, but emotionally, with the disappointments, the frustrations, the injustices of life. Simon is a very human character. He's hurt, he's angry, he's bitter. Carrying Jesus' cross offers him a unique opportunity: by carrying this burden for Jesus, will Simon learn that Jesus can carry his? Just what can Simon learn from Jesus?
I'm not sure if Simon's Crossing is being marketed as christian fiction or general fiction. And I think in this case it may matter a good deal.
One thing I wasn't exactly expecting in this one is sex and violence. Granted, I think the crucifixion is violent; it has to be portrayed violently. It should not be glamorized. Readers should see how cruel, how ugly, how torturous it was. But the sex was slightly unexpected. On the one hand, it occurs within a marriage. And so it isn't that its immoral or even distasteful. (There is also a violent rape/murder within the book. Because of these scenes, I would think this one should probably be classified as adult.)
One thing I was expecting but didn't find was a gospel message. On the one hand, it may keep the book from being classified as 'preachy.' Readers are left to make up their own minds when it comes to who Jesus was, what his main message was to his followers, and if he did in fact rise from the dead. On the other hand, you could see it as a missed opportunity. In so many ways the cross is central to Simon's Crossing. But I think, perhaps, that it is more symbolic, more mystic, than I'd have liked.
After having read What is the Gospel? earlier this week, I couldn't help but notice what was missing in Simon's Crossing. For me, what was missing was Jesus as Lord and Savior. The emphasis seemed to be instead on Jesus as a good teacher--a great teacher even--who can show us how to change the world, how to live in peace and love, how to embrace others, how to build the kingdom here on earth.

The kingdom of God is not here yet, and so we know it is our task to contribute whatever we are able, with God's help, to bring it about for both the present and the future. If, as Nava suggested, Jesus died to put God's kingdom among us, the least we can do is make our modest contributions to its creation. (153)

I found the narrative to be compelling. I thought it was well written. It was a unique perspective. And I'm glad to have had the opportunity to read the book.
© Becky Laney of Operation Actually Read Bible
Posted by Becky at 2:30 PM

Interesting concept. Can I offer a recommendation to you? This one focuses on angels and their role in our lives and how God surrounds us with angels to help buffer us from life's effects. The book is "Testings of Devotion," by Cheryl Dellesega (who's also written a number of non-fiction books, plus a fiction series for adolescent girls). She said she's fascinated by angels and heaven and the specifics of what happens after we die. This book brings to the life GOOD angels. I like how it shows that even the good angels, behind heaven's gates, can be tempted by Lucifer, etc. It's first in a series -- and a very interesting, thought-provoking book.

I just finished Simon's Crossing and I agree with your review.

So much so, I linked it at my blog so others can read what you wrote. I was totally caught off guard by this book.

Feel free to visit my review on it at: