Book Review: What is the Gospel? 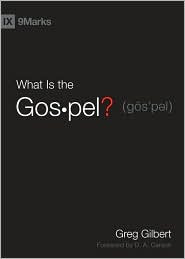 What is the Gospel? by Greg Gilbert. Foreword by D.A. Carson. Crossway. 127 pages.
From the introduction:

What is the gospel of Jesus Christ?
You'd think that would be an easy question to answer, especially for Christians. In fact, you'd think that writing a book like this--one asking Christians to think carefully about the question, What is the gospel of Jesus?--would be completely unnecessary. It's like asking carpenters to sit around and ponder the question, What is a hammer?

Gilbert insists that for the good news to be the good news, you need to present the full picture. A full picture that includes plenty of bad news. The good news isn't good if you don't view it within the correct framework. For people to accept Jesus as their Savior--as their Lord--they need to know that God has authority over them--over the world, over creation; they need to realize that they are sinners, that God is a God who hates sin, a God who judges sinners; they need to know what they're being saved from. Only if they recognize that they are in need of a Savior, can the good news have power, have relevance. The good news about the "bad news" is that there is a but.

The Bible is the story of God's counteroffensive against sin. It is the grand narrative of how God made it right, of how he is making it right, and how he will one day make it right finally and forever. (61)

Using Scripture, Gilbert creates a framework for presenting the gospel--this framework is found in chapters two through five.
The book uses four crucial questions to answer the bigger question. These are:
Or, if you prefer, four main points: God, man, Christ, response.
The remaining chapters deal with what it means to be a Christian; what it means to be part of God's kingdom; why it is so very, very important for Christians to know what they believe and why; why it is crucial for Christians to keep the cross at the center of the gospel message; how essential it is for Christians to not change the gospel message in an attempt to stay current, stay relevant.
From chapter two, God the Righteous Creator

Let me introduce you to god. (Note the lowercase g.)
You might want to lower your voice a little before we go in. He might be sleeping now. He's old, you know, and doesn't much understand or like this "newfangled" modern world. His golden days--the ones he talks about when you really get him going--were a long time ago, before most of us were even born. That was back when people cared what he thought about things, and considered him pretty important in their lives.
Of course all that's changed now, though, and god--poor fellow--just never adjusted very well. Life's moved on and passed him by. Now, he spends most of his time just hanging in the garden out back. I go there sometimes to see him, and there we tarry, walking and talking softly and tenderly among the roses...
Anyway, a lot of people still like him, it seems--or at least he manages to keep his poll numbers pretty high. And you'd be surprised how many people even drop by to visit and ask for things every once in a while. But of course that's alright with him. He's here to help.
Thank goodness, all the crankiness you read about sometimes in his old books--you know, having the earth swallow people up, raining fire down on cities, that sort of thing--all that seems to have faded in his old age. Now he's just a good-natured, low-maintenance friend who's really easy to talk to--especially since he almost never talks back, and when he does it's usually to tell me through some slightly weird "sign" that what I want to do regardless is alright by him. That really is the best kind of friend, isn't it?
You know, the best thing about him, though? He doesn't judge me. Ever, for anything. Oh sure, I know that deep down he wishes I'd be better--more loving, less selfish, and all that--but he's realistic. He knows that I'm human and nobody's perfect. And I'm totally sure he's fine with that. Besides, forgiving people is his job. It's what he does. After all, he's love, right? And I like to think of love as "never judging, only forgiving." That's the god I know. And I wouldn't have him any other way.
Alright, hold on a second....Okay, we can go in now. And don't worry, we don't have to stay long. Really. He's thankful for any time he can get. (37-38)

Are you guilty of remaking God--of trying to remake God--into who you would have him to be? Does this passage make you think--or rethink--how you think about God?
I liked What is the Gospel? I liked its message. I liked its emphasis on Scripture, on gospel truth. I thought it was straight-forward and accessible.
© Becky Laney of Operation Actually Read Bible
Posted by Becky at 1:52 PM

Great review! I enjoyed reading it.
This sounds like not only a good book to individually read and study, but a good book to be used in a book group.