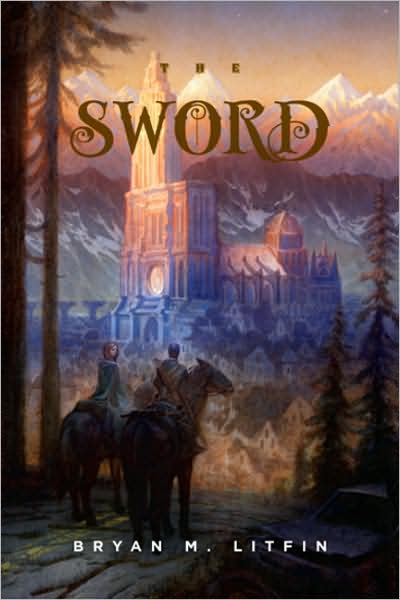 The Sword. Bryan M. Litfin. 2010. April 2010. Crossway. 412 pages.
Prologue: In the year 2042, the world as we know it came to an end. The edifice of civilization proved far more fragile than anyone ever realized. One hard blow, then another--that was enough to shatter it into a million pieces.
The collapse all began with the friendly exchange of a papaya for a photograph.

Chapter One: The lone man deep in the woods of the Beyond knew a good sword could make the difference between life and death.
If I seem to stumble through this review, blame me not the author. Bryan M. Litfin has created a compelling, futuristic novel with a great premise. Four hundred years after the world (as-we-have-known-it) has been destroyed, there remains the thriving kingdom of Chiveis. A kingdom ruled by a king strongly influenced by a high priestess.
Chiveis doesn't have one god--it has four! Vulkain, Pon, Elzebul, and Astrebril. The high priestess has dedicated her life to serving Astrebril, and there is little she wouldn't do for her god. Officially, the people are allowed to worship--or not worship--as they see fit. (The worship can get a little out of hand. It can be a bit wild, a bit violent, a bit lusty.) Not all in the community are happy with the gods--with religion as they know it. Some wish there was another god, a better god, a god who is good instead of being a scoundrel.
Teo is our young hero. He happens--while saving a damsel in distress, though Ana isn't your typical damsel in distress--upon a forgotten text, an ancient one. Teo has discovered the Old Testament. Unfortunately, the New Testament has been damaged so badly that Teo can't salvage it. But he does start to translate the Old Testament, and he does start a small gathering of god-seekers. Men and women (all ages) who want a little bit more out of life. Men and women who are asking questions and finding little to love in the gods they've grown up with. Ana, Teo's love interest, finds this sacred book amazing. Its description of God--or Deu--creates a sense of wonder, of awe for her and some of the others. She is more than willing to take this God at His word. To worship him, to love him, to serve him--with her life if need be. Others in the community aren't as sure, as confident. Some would prefer to keep this text as mysterious as possible. To distort the straight-forward message, to make this 'wisdom-text' more about them being special and less about God. (One man in this community reads Genesis 3 and sees the snake--the serpent--as the hero of the story!)
Ana, our young heroine, is a beautiful woman. And though Teo does rescue her on numerous occasions throughout the novel, she rescues him several times too. These two seem to need each other. Is Ana everything Teo dreamed of? She comes close. Is Teo everything she dreamed of? At first it seems that way. But as Ana becomes more devoted to Deu, she realizes that the man by her side needs to love and worship the same God she does. What Ana wants is for Teo to be that man. She wants Teo to come to love her God. Not just have an intellectual curiosity about him. But to love him, trust him, to be willing to follow him no matter the cost. (She wants Teo to be her Boaz.)
This 'new' religion--one belonging to the Ancients--may just cost them their lives if the High Priestess has her way.
What I liked best about The Sword was the opportunity to see the Bible--the Old Testament--through new eyes. When was the last time you read the Bible with a sense of wonder, of awe, of appreciation? I think it is easy--quite natural--to take the Bible for granted. Many Christians (though by no means all Christians) grow up hearing Bible stories, singing Bible songs. The message of the Bible seems so familiar--in a way. In this scenario, the Bible is being read for the very first time in generations. Hundreds of years have passed since this message was known, was preached, was followed. Everything is brand new. To see Ana and others awaken to God's truth, his Word, it was thrilling.
© Becky Laney of Operation Actually Read Bible
Posted by Becky at 11:43 AM