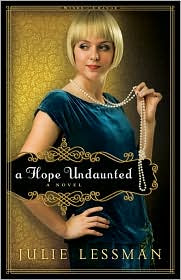 A Hope Undaunted by Julie Lessman. 2010. Revell. 505 pages.
Boston, Massachusetts, May 1929
Now this is how love should be--nice and neat.
A Hope Undaunted is the first novel in Julie Lessman's new series, Wind of Change. But in many ways it isn't the first of anything. For it continues the story of the O'Connor family, a soap-opera drama first begun in A Passion Most Pure. (The second and third novels are A Passion Redeemed and A Passion Denied.) Honestly, I'm not sure how you would make sense of this one if you weren't familiar with the Daughters of Boston series.
A Hope Undaunted stars Katie O'Connor, a young woman coming of age at a crazy time in American history. Katie definitely is a BIG believer in women's rights. She has ambition; she has a plan. She wants to be a lawyer. But that isn't enough, she wants to be a congresswoman too! Marriage is part of her plan. But he must be rich, ambitious, powerful. When we first meet Katie, she's sure of herself, of what she wants. And one of those wants is Jack Worthington.
But one too many broken curfews leaves Katie uncertain of many things. Her father refuses to let her see her boyfriend, Jack. He's refusing her law school, too, unless she volunteers her summer to helping the less fortunate. She'll be working at the BCAS--Boston Children's Aid Society. She'll be working for Luke McGee and Parker Riley. And she clashes from the start with one of her bosses.
Of course, that could be because there's a history between the two...and an undeniable attraction. Parker warns Luke again and again that it's unwise, unprofessional, to fall in love with Katie. But. Luke just can't help himself. Can Katie?
I would say that A Hope Undaunted is complex, but that's not quite true. It's not so much complex as it is packed with dramatic twists and turns. It's a soap opera with many characters, many stories.
If you enjoyed Lessman's Daughters of Boston series, chances are you'll enjoy this one too. But. I feel A Hope Undaunted is messier than Lessman's previous novels. Because this isn't just a chaotic story of Katie's romances (in and out of the office). No, it's a family drama. Readers become a little too acquainted with previous characters. Marcy and Patrick (the parents), Faith and Collin (oldest sister, brother-in-law), Charity and Mitch (second sister, brother-in-law), and Lizzie and Brady (third sister, brother-in-law). Add in two more brothers--Sean and Steven--with six grandchildren (I'm not sure if they're all clearly named and properly identified), and a couple of family friends like Emma, and you'll see why the plot becomes a bit too tangled. I'm not saying it is unrealistic, necessarily, because life is messy and families can be a bit chaotic.
© Becky Laney of Operation Actually Read Bible
Posted by Becky at 2:35 PM

I also enjoyed A Hope Undaunted and am a big fan of Julie Lessman.

I found the characters to be fairly three dimensional and enjoyed the interaction between the two main characters, Katie and Luke - although at times I was surprised by Katie’s sudden abrupt turns. The O’Connor family is true to form in their larger-than-life sort of Irish personalities and entertaining as always.

I posted a more in-depth review of my own at
www.tracysbooknook.com.

Sorry if that was unclear.