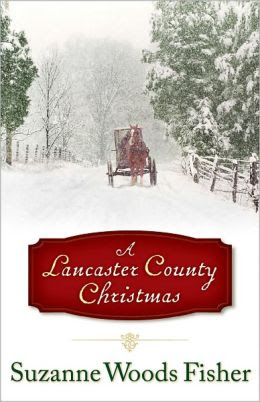 I was surprised by how much I LOVED this one. I am not usually a fan of Amish fiction. One or two titles a year, perhaps, but it is not something that I usually seek out. But Suzanne Woods Fisher's novel, A Lancaster County Christmas, had me hooked within pages. It is told through several perspectives, which I think worked really well. The focus is on two couples or two families. The "English" Fitzpatrick family, Jaime and C.J. and their search-and-rescue dog, Tucker. And the Amish Riehl family, Sol, Mattie, Danny, and Zach.  (Technically, Zach is a cousin, but he lives with the couple.) Jaime and C.J. are stranded with the Riehl family after a bizarre car accident: her new car rolled down the hill and straight into a pond. The car accident plus a few additional snow storms have made it unlikely they'll be able to make it to their own holiday plans. So this outsider couple will be spending Christmas with strangers. Neither is particularly familiar with the Amish culture, so it proves interesting at times.

What I LOVED about this one is that each character is so genuinely human. Each is struggling with something big. C.J. is worried about his wife, his marriage, his finances. The father who abandoned her is "miraculously" back in their lives, but he is "gifting" her in all the wrong ways. And usually leaving her husband to ultimately pay the bills. (Something he keeps from his wife who is sensitive and insecure particularly when it comes to that relationship.) Jaime is worried about her marriage and her career. She is desperately unhappy in her job; her creative dreams are not being met. And she's so very, very certain that her husband is having an affair. Sol and Mattie are struggling with the same issues, for the most part, though in different ways. They have spent years trying to have a family and so far they've just had one child and one miscarriage. Both want a large family; both have so much love to give and a big need to give that love to a child. Both struggle with how to best raise Danny. How much worry is normal? Sol is also struggling with Zach, his wife's cousin. Zach's struggles bring back his own struggles as a teen. But he worries that Danny will learn all the wrong lessons from Zach. Isn't protecting Danny more important than doing what is right and best for Zach? And then there's Zach....

This one is such a compelling read! I loved the characters, the writing, and the story itself.