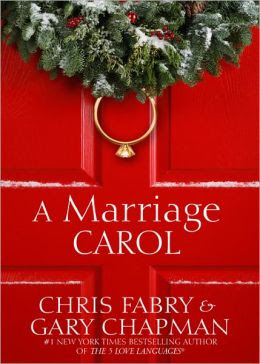 Jacob and Marlee have been married exactly twenty years when the novel opens, but their marriage won't be lasting much longer. Marlee thinks it would be better if they parted ways. It could be that she feels Jacob is just as disinterested in her as she is in him. It could be that she felt a spark with an old boyfriend whom she recently reconnected with online. The two are actually on their way to see a divorce lawyer when a car accident in a horrid snow storm makes both husband and wife pause.

A Marriage Carol is told from Marlee's point of view. Marlee wakes up from the crash and struggles to make her way to the first house she sees. She looked for her husband, initially, around the scene of the accident, but, was unable to find him or his tracks. Soon she's safe and warm and in the company of an older man named Jay. He's an optimist, a marriage counselor of sorts that asks troubled couples to rely on his hope for their marriages if they don't have enough of their own. He also offers Marlee a unique once-in-a-lifetime opportunity. To melt (Christmas Eve) snow in (magic) pots on the stove and look in each pot to see her past, present, and future. The past reveals the young couple in love on their wedding day--Christmas Eve--and on subsequent anniversaries through the two decades they've been together. The present reveals a troubling image: her husband in peril. The future a still more troubling image...a glimpse of what her life would be like if she did divorce her husband. Marlee wants to know a few things...is there still hope for her husband...and...can the future be changed?

The novel works, at least, it works as you're reading it. The writing is nice which perhaps help you forget the absurdity of the magical elements of this one. It is an interesting adaptation of Charles Dickens' A Christmas Carol.