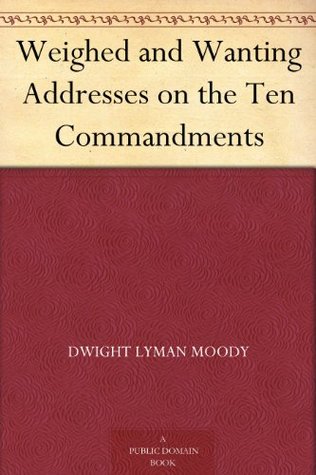 Weighed in the Balances In the fifth chapter of Daniel we read the history of King Belshazzar. One chapter tells us all we know about him. One short sight of his career is all we have. He bursts in upon the scene and then disappears. “This is the writing that was written, Mene, Mene, Tekel, Upharsin. This is the interpretation of the thing: Mene—God hath numbered thy kingdom and finished it. Tekel—Thou art weighed in the balances, and art found wanting. Peres—Thy kingdom is divided, and given to the Medes and Persians.” If some one had told the king an hour before that the time had come when he must step into the balances and be weighed, he would have laughed at the thought. But the vital hour had come…
Perhaps you say: “I hope Mr. Moody is not going to compare me with that heathen king.” I tell you that a man who does evil in these Gospel days is far worse than that king. We live in a land of Bibles. You can get the New Testament for a nickel, and if you haven’t got a nickel you can get it for nothing. Many societies will be glad to give it to you free. We live in the full blaze of Calvary. We live on this side of the cross, but Belshazzar lived more than five hundred years on the other side. He never heard of Jesus Christ. He never heard about the Son of God. He never heard about God except, perhaps, in connection with his father’s remarkable vision. He probably had no portion of the Bible, and if he had, probably he didn’t believe it. He had no godly minister to point him to the Lamb of God.
All this happened long centuries ago. Let us get down to this century, to this year, to ourselves. We will come to the present time. Let us imagine that now, while I am preaching, down come some balances from the throne of God. They are fastened to the very throne itself. It is a throne of equity, of justice. You and I must be weighed. I venture to say this would be a very solemn audience. There would be no trifling. There would be no indifference. No one would be thoughtless.

I LOVED, LOVED, LOVED, LOVED Moody's Weighed and Wanting: Addresses on the Ten Commandments. It's a thought-provoking, often-convicting, humbling read. You might think that a book about the law, about the Ten Commandments, would be so stern and harsh that it would withhold grace or gospel or hope from its readers. That certainly isn't the case. The book is not anti-gospel or anti-grace. If it has to be anti anything, I'd say it would be anti-pride and anti-conceit. It's humbling to the extent that it makes your own righteousness--your apart-from-Christ-righteousness--appear as God sees it: filthy rags. It brings to mind the lyrics to Caedmon's Calls' I Boast No More:


No more my God, I boast no more
Of all the duties I have done
I quit the hopes I held before
To trust the merits of Thy Son

So the premise of the book is a simple one. He challenges his readers to weigh themselves not by their own standards, not by the standards of the church and neighbors, but by God's standard alone. He will examine--carefully elaborate--on each of the Ten Commandments. He'll ask readers to see how they measured up one commandment at a time. There is one chapter per commandment, I believe.


I will admit that if you perfectly keep the commandments, you do not need to be saved by Christ; but is there a man in the wide world who can truly say that he has done this? Now face these Ten Commandments honestly and prayerfully. See if your life is right, and if you are treating God fairly. God’s statutes are just, are they not? If they are right, let us see if we are right. Let us pray that the Holy Ghost may search each one of us. Let us get alone with God and read His law—read it carefully and prayerfully, and ask Him to show us our sins and what He would have us to do.


The conviction deepens in me with the years that the old truths of the Bible must be stated and restated in the plainest possible language.

Man does not need to be commanded to worship, as there is not a race so high or so low in the scale of civilization but has some kind of a god. What he needs is to be directed aright.

“Thou shalt not” is the pruning-knife that God uses. From beginning to end, the Bible calls for wholehearted allegiance to Him. There is to be no compromise with other gods.

Many a professing Christian is a stumbling-block because his worship is divided. On Sunday he worships God; on week days God has little or no place in his thoughts.

You don’t have to go to heathen lands to-day to find false gods. America is full of them. Whatever you make most of is your god. Whatever you love more than God is your idol.

Worship involves two things: the internal belief, and the external act. We transgress in our hearts by having a wrong conception of God and of Jesus Christ before ever we give public expression in action.

The opinions that some people hold about Christ are not in accordance with the Bible, and are real violations of this second commandment.

We are apt to rush into God’s presence, and rush out again, without any real sense of the reverence and awe that is due Him. We forget that we are on holy ground.

You may be a professing Christian, but I wouldn’t give much for your religion unless it gets into your life and teaches you how to live. I wouldn’t give a snap of my finger for a religion that doesn’t begin at home and regulate your conduct toward your parents.

Did you ever in your heart wish a man dead? That was murder. Did you ever get so angry that you wished any one harm? Then you are guilty. I may be addressing some one who is cultivating an unforgiving spirit. That is the spirit of the murderer, and needs to be rooted out of your heart. We can only read man’s acts—what they have done. God looks down into the heart. That is the birthplace and home of the evil desires and intentions that lead to the transgression of all God’s laws.

The home existed before the church, and unless the home is kept pure and undefiled, there can be no family religion and the church is in danger.

Partial obedience is not enough: obedience must be entire. The little indulgences, the small transgressions are what drive religion out of the soul. They lay the foundation for the grosser sins. If you give way to little temptations, you will not be able to resist when great temptations come to you.

Let your confession be as wide as your transgression.

We may say that covetous desire plunged the human race into sin. We can trace the river back from age to age until we get to its rise in Eden. When Eve saw that the forbidden fruit was good for food and that it was desirable to the eyes, she partook of it, and Adam with her. They were not satisfied with all that God had showered upon them, but coveted the wisdom of gods which Satan deceitfully told them might be obtained by eating the fruit. She saw,—she desired—then she took! Three steps from innocence into sin.

For fifteen hundred years man was under the law, and no one was equal to it. Christ came and showed that the commandments went beyond the mere letter; and can any one since say that he has been able to keep them in his own strength?

Now is the day and hour to accept salvation, and then He will be with you. Do you step aside and say: “I’m not ready yet. I want a little more time to prepare, to turn the matter over in my mind?” Well, you have time, but bear in mind it is only the present; you do not know that you will have to-morrow. Wasn’t Belshazzar cut off suddenly? Would he have believed that that was going to be his last night, that he would never see the light of another sun? That banquet of sin didn’t close as he expected. As long as you delay you are in danger. If you don’t enter into the kingdom of heaven by God’s way, you cannot enter at all. You must accept Christ as your Savior, or you will never be fit to be weighed. My friend, have you got Him? Will you remain as you are and be found wanting, or will you accept Christ and be ready for the summons? “This is the record, that God hath given to us eternal life, and this life is in His Son. He that hath the Son hath life: and he that hath not the Son of God hath not life.” May God open your heart to receive His Son now!

Sounds wonderful! Thanks for bringing this book to my attention.