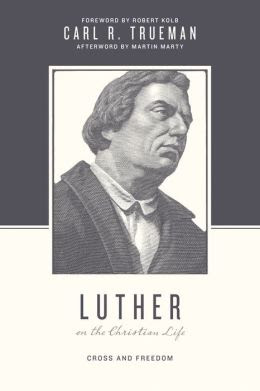 I've read several books in Crossway's Theologians of the Christian Life series. I enjoyed reading Carl Trueman's book on Martin Luther. I wouldn't say it was an "easy" read, but, I would say that it was worth my time overall.

Don't read Luther on the Christian Life expecting to find a hero, Trueman stresses that point again and again. Luther is human, very human; one saved by grace and grace alone. His personal life wasn't flawless--no one's is after all--and his theology wasn't flawless either.

Trueman also stresses the fact that Luther was not a modern American evangelical. You must remove--in a way--your context, your assumptions about what it means to be a Christian, what the Christian life looks like in public and private--and pick up his context. To understand Luther, to appreciate Luther, one must place him into the right context. One must seek to learn more about him: his life, his experiences, the culture and society in which he lived and wrote about, and the world views around him. One can't simply pick up and read The Ninety-Five Theses and expect to understand it or fully understand it. It takes work to understand and appreciate his writings.


God does not find that which is lovely and then move out in love toward it; something is made lovely by the fact that God first sets his love upon it. He does not look at sinful human beings and see among the mass of people some who are intrinsically more righteous or holy than others and thus find himself attracted to them. Rather, the lesson of the cross is that God chooses that which is unlovely and repulsive, unrighteous and with no redeeming quality, and lavishes his saving love in Christ upon it. (67)

The logic of the cross says that weakness and death, painful as they are, have been utterly subverted by God in Christ, that pain and mortality have ironically become the means of strength and power, and that the grave itself has become the gateway to paradise. (77)