Book Review: The Lion, The Witch, and the Wardrobe 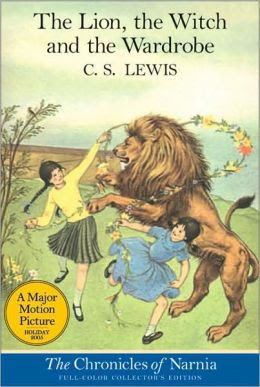 Once there were four children whose names were Peter, Susan, Edmund, and Lucy. This story is about something that happened to them when they were sent away from London during the war because of the air-raids.

I've been reading and rereading the Chronicles of Narnia since I was in fourth grade. The FIRST book, The Lion, The Witch, and the Wardrobe was a classroom read-aloud. It was a powerful experience to listen to this fantasy novel. The story was familiar, in a way, yet new. I loved the characters then and now. This FIRST book is one I've read and reread dozens of times. I love Peter, Susan, Edmund, and Lucy. I love Mr. Tumnus, Mr. Beaver, and Mrs. Beaver. But above all else, I love, love, love Aslan.

Here the Beaver’s voice sank into silence and it gave one or two very mysterious nods. Then signaling to the children to stand as close around it as they possibly could, so that their faces were actually tickled by its whiskers, it added in a low whisper— “They say Aslan is on the move—perhaps has already landed.” And now a very curious thing happened. None of the children knew who Aslan was any more than you do; but the moment the Beaver had spoken these words everyone felt quite different. Perhaps it has sometimes happened to you in a dream that someone says something which you don’t understand but in the dream it feels as if it had some enormous meaning—either a terrifying one which turns the whole dream into a nightmare or else a lovely meaning too lovely to put into words, which makes the dream so beautiful that you remember it all your life and are always wishing you could get into that dream again. It was like that now. At the name of Aslan each one of the children felt something jump in its inside. Edmund felt a sensation of mysterious horror. Peter felt suddenly brave and adventurous. Susan felt as if some delicious smell or some delightful strain of music had just floated by her. And Lucy got the feeling you have when you wake up in the morning and realize that it is the beginning of the holidays or the beginning of summer. “And what about Mr. Tumnus?” said Lucy; “where is he?” “S-s-s-sh,” said the Beaver, “not here. I must bring you where we can have a real talk and also dinner.”

“It’s no good, Son of Adam,” said Mr. Beaver, “no good your trying, of all people. But now that Aslan is on the move—” “Oh, yes! Tell us about Aslan!” said several voices at once; for once again that strange feeling—like the first signs of spring, like good news, had come over them.
“Who is Aslan?” asked Susan. “Aslan?” said Mr. Beaver. “Why, don’t you know? He’s the King. He’s the Lord of the whole wood, but not often here, you understand. Never in my time or my father’s time. But the word has reached us that he has come back. He is in Narnia at this moment. He’ll settle the White Queen all right. It is he, not you, that will save Mr. Tumnus.” “She won’t turn him into stone too?” said Edmund.
“Lord love you, Son of Adam, what a simple thing to say!” answered Mr. Beaver with a great laugh. “Turn him into stone? If she can stand on her two feet and look him in the face it’ll be the most she can do and more than I expect of her. No, no. He’ll put all to rights as it says in an old rhyme in these parts…

“Aslan a man!” said Mr. Beaver sternly. “Certainly not. I tell you he is the King of the wood and the son of the great Emperor-beyond-the-Sea. Don’t you know who is the King of Beasts? Aslan is a lion—the Lion, the great Lion.” “Ooh!” said Susan, “I’d thought he was a man. Is he—quite safe? I shall feel rather nervous about meeting a lion.” “That you will, dearie, and no mistake,” said Mrs. Beaver; “if there’s anyone who can appear before Aslan without their knees knocking, they’re either braver than most or else just silly.” “Then he isn’t safe?” said Lucy. “Safe?” said Mr. Beaver; “don’t you hear what Mrs. Beaver tells you? Who said anything about safe? ‘Course he isn’t safe. But he’s good. He’s the King, I tell you.” “I’m longing to see him,” said Peter, “even if I do feel frightened when it comes to the point.”

I love everything about The Lion, The Witch, and the Wardrobe: the storytelling, the world-building, the pacing, the dialogue, and the characterization. Most of all, I love how Lewis doesn't waste words with battle-action. Things happen certainly, but, we don't have to endure endless descriptions of the action.

© Becky Laney of Operation Actually Read Bible
Posted by Becky at 8:34 AM