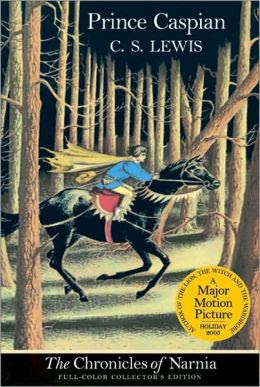 
ONCE THERE WERE FOUR CHILDREN whose names were Peter, Susan, Edmund, and Lucy, and it has been told in another book called The Lion, the Witch and the Wardrobe how they had a remarkable adventure. They had opened the door of a magic wardrobe and found themselves in a quite different world from ours, and in that different world they had become Kings and Queens in a country called Narnia. While they were in Narnia they seemed to reign for years and years; but when they came back through the door and found themselves in England again, it all seemed to have taken no time at all. At any rate, no one noticed that they had ever been away, and they never told anyone except one very wise grown-up.

Prince Caspian is the second book in C.S. Lewis' Chronicles of Narnia series. It is the second visit to Narnia for Peter, Susan, Edmund, and Lucy. Hundreds of years have passed since they reigned as kings and queens in Narnia. Their reigns have become the stuff of legend--along with other details about "old Narnia." Not every one believes that there ever was a King Peter, King Edmund, Queen Susan, and Queen Lucy. Some even dare to go so far as to say there never was an Aslan. But some do still believe and cling to "old Narnia." Among them a young boy, Caspian, who learned of 'the legends' of old Narnia first from his nurse, and, then later--secretly--from his tutor. It is Caspian who calls the four back into Narnia: when he blows the magical horn. Why did he blow it? It was most definitely a great time of need and the horn came with a promise that when it was blown help would come.

Do I love, love, love Prince Caspian? Probably not. I do really like it however. I like spending time with Peter, Edmund, Susan, and Lucy. I enjoyed meeting Prince Caspian. I liked meeting Reepicheep and some of the others. I like the tension in this one as well: the tension between belief and disbelief. I think I appreciate it more each time I revisit it.


“Do you believe all those old stories?” asked Trumpkin. “I tell you, we don’t change, we beasts,” said Trufflehunter. “We don’t forget. I believe in the High King Peter and the rest that reigned at Cair Paravel, as firmly as I believe in Aslan himself.” “As firmly as that, I daresay,” said Trumpkin. “But who believes in Aslan nowadays?”

“Wouldn’t it be dreadful if some day in our own world, at home, men started going wild inside, like the animals here, and still looked like men, so that you’d never know which were which?”

But for the movement of his tail he might have been a stone lion, but Lucy never thought of that. She never stopped to think whether he was a friendly lion or not. She rushed to him. She felt her heart would burst if she lost a moment. And the next thing she knew was that she was kissing him and putting her arms as far round his neck as she could and burying her face in the beautiful rich silkiness of his mane. “Aslan, Aslan. Dear Aslan,” sobbed Lucy. “At last.” The great beast rolled over on his side so that Lucy fell, half sitting and half lying between his front paws. He bent forward and just touched her nose with his tongue. His warm breath came all round her. She gazed up into the large wise face. “Welcome, child,” he said. “Aslan,” said Lucy, “you’re bigger.” “That is because you are older, little one,” answered he. “Not because you are?” “I am not. But every year you grow, you will find me bigger.” For a time she was so happy that she did not want to speak. But Aslan spoke. “Lucy,” he said, “we must not lie here for long. You have work in hand, and much time has been lost today.” “Yes, wasn’t it a shame?” said Lucy. “I saw you all right. They wouldn’t believe me. They’re all so—” From somewhere deep inside Aslan’s body there came the faintest suggestion of a growl. “I’m sorry,” said Lucy, who understood some of his moods. “I didn’t mean to start slanging the others. But it wasn’t my fault anyway, was it?” The Lion looked straight into her eyes. “Oh, Aslan,” said Lucy. “You don’t mean it was? How could I—I couldn’t have left the others and come up to you alone, how could I? Don’t look at me like that … oh well, I suppose I could. Yes, and it wouldn’t have been alone, I know, not if I was with you. But what would have been the good?” Aslan said nothing. “You mean,” said Lucy rather faintly, “that it would have turned out all right—somehow? But how? Please, Aslan! Am I not to know?” “To know what would have happened, child?” said Aslan. “No. Nobody is ever told that.” “Oh dear,” said Lucy. “But anyone can find out what will happen,” said Aslan. “If you go back to the others now, and wake them up; and tell them you have seen me again; and that you must all get up at once and follow me—what will happen? There is only one way of finding out.”


© Becky Laney of Operation Actually Read Bible
Posted by Becky at 7:00 AM