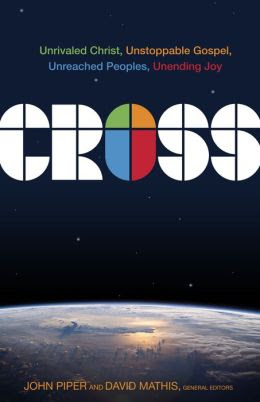 Cross is an essay collection featuring contributions from John Piper, David Mathis, Thabiti Anyabwile, Kevin DeYoung, Conrad Mbewe, Richard Chin, Mack Stiles, Matt Chandler, Michael Oh, D.A. Carson, and David Platt. The articles--or essays, or presentations--originated from the Cross Student Missions Conference in Louisville, Kentucky, in December 2013. (Some of these messages can be watched online. I have not watched them all, most are around an hour long. But I think they'd all be worth watching.) The book is about evangelism and missions, reaching unreached and unengaged people groups with the saving truth of the gospel message.

People groups are communities or societies of persons and families with a shared language and common ethnic identity. (3)
An unreached people is a group with no indigenous Christian community, or Christians so few in number (and without adequate resources) that they are unlikely to ably plant the gospel and the church among their people. (3)
An unengaged people is one in which no known church-planting effort is currently active. (4)
Missions is a term for preserving a category for the church's evangelistic efforts to reach the unreached and engage the unengaged. (4)
It may sound daunting to learn that 6,500-7,000 of the world's people groups are unreached (and more than 40 percent of those are presently unengaged), but it's also deeply encouraging to put these figures into context…Although many people are still unreached, the number is only a fraction of that of 100 years ago. The goal is attainable in our generation--if we mobilize in prayer and effort and work together to disciple the remaining least reached peoples. (4, 5)

The table of contents does a great job expressing the goal of the book:

I would definitely recommend CROSS. I think it's a fantastic book on the subject of missions and the great commission. The book points out that for some Christians obeying God's call means staying, and, for other Christians obeying God's call means going. The key is to be obedient to God. That being said, the book is hoping to inspire the current generation of believers to go. To go to where the unreached and unengaged are. To proclaim the one, true gospel.

My absolute favorite chapter was "Five Surprising Motivations for Missions" by Kevin DeYoung, which begins, "I might as well tell you from the get-go: the five surprising motivations are the five points of Calvinism. As crazy as it may sound to some, I believe the strongest trust in God's sovereignty spurs us on to make the most costly sacrifices in world missions" (45). He goes on to say, "it's not an exaggeration to say Calvinists birthed the modern missions movement in the Protestant church. History shows us that a high view of God's all-determining sovereignty has not deterred Christians from going to hard places and giving their lives for the spread of the gospel" (49). He then presents three scripture passages for the five points. They are: John 3:1-8, John 6:35-48, 60-65, and John 10:7-15, 27-30.

I would also highly recommend watching Matt Papa's mission-themed music video THE REWARD OF HIS SUFFERING. Take ten minutes and give it your attention. I happened to discover this video while reading the book. I saw an immediate connection. One thing I loved about the video, is that it shares details about unreached people groups. Name. Population. Location. Percentage that are Christian. To see on the screen, for example, "Population 1,096,000, 0% Christian" is thought-provoking at the very least, closer to heartbreaking really. And that's just one example. The video and this book remind you that there are billions of people in the world who have never heard the gospel.


Christ is supremely magnified in the peoples when the people are supremely satisfied in Christ. We have the best news in all the world: Jesus Christ, the Son of God, died and rose and reigns to make the nations fully and eternally glad in the glory of God. When Christ becomes the satisfaction of the nations, and God becomes their delight, then he is honored and they are saved. (John Piper, 26)

When Paul boils down his missionary method to its bedrock foundation, he always talks of preaching and teaching the gospel. He builds everything--his entire missionary agenda--on this one essential method. So Paul says things like, "I decided to know nothing among you except Jesus Christ and him crucified" (1 Cor. 2:2). or, "Him we proclaim, warning everyone and teaching everyone with all wisdom, that we may present everyone mature in Christ" (Col. 1:28). That's his method. I emphasize this for one reason: too many Christians wrongly think Christ can be made known without the use of words. That's false. And too many missionaries give so much time to strategies for getting in and remaining in countries that they sadly never get around to proclaiming Christ. (Thabiti Anyabwile, 29)

There are generational issues and language issues and cultural issues that can make for rocky soil. But a dead person is a dead person. It's a miracle to raise any of them. And God can do it. Anytime, anywhere, by the same gospel call through which you were saved. Why go to the nations unless you believe in this kind of God with this kind of sovereign power?
In John 5, Jesus says a time is coming when he will call forth the dead from their tombs, some to everlasting life and some to everlasting death (John 5:29). There is no uncertainty as to the efficacy of this call. Jesus will speak, and the dead will be raised. It's a good thing Jesus said, "Lazarus, come forth" (John 11:43), because if he had not prefaced the command with the name of his friend, all the tombs would have been emptied. Such is the power of the divine word.
You may say, "Why go share the gospel if God has chosen just some to believe?" The Bible's logic would have you ask, "Why go share the gospel unless God has chosen some to believe?" John Newton, the slave-trader-turned-pastor and hymn-writer once said, "If I were not a Calvinist, I think I should have no more hope of success in preaching to men than in preaching to horses and cows."
As many as were appointed for eternal life believed. That's why we preach. That's why we share. That's why we go. And that line is not found in John Calvin or John Owen or John Piper, but in the Bible--Acts 13:48. God is the only one who can make light shine in our darkness. He's the only one who can give new life to the dead. He's the only one who can justify. He's the only one who can quicken the heart, the only one to renew the mind. (Kevin DeYoung, 59)