Book Review: The Faith of a Mockingbird 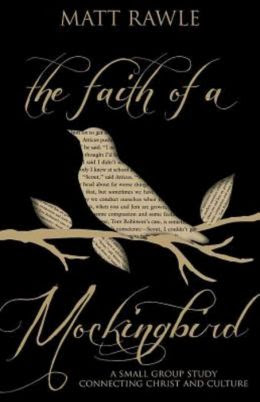 Love Harper Lee's To Kill A Mockingbird? Looking for a book to use with a small group study? The Faith of a Mockingbird might just catch your eye.

Rawle writes, "To Kill A Mockingbird serves as a lens through which we can understand our place in the world, how we play a role in God's story, and what it means to live out a hopeful faith in a broken world."

After briefly refreshing his readers on the plot and significance of To Kill A Mockingbird, Rawle devotes four chapters to examining the main characters of the book: Scout, Atticus Finch, Tom Robinson, and Boo Radley. Each chapter has daily readings.

Rawle's goal is not only to discuss the book, but, to bring to light spiritual truths from the story and the characters. What can you learn about yourself? about others? about faith and redemption? about God?


Ultimately Atticus models the Christian ethics of strength through sacrifice and victory as defeat, a way of life rooted in Christ's suffering, death, and resurrection. His example prompts us to reflect on our own commitment--it may be easy to follow Christ when things go well, but are we willing to follow Christ's footsteps even when they lead to the cross?


Brokenness frames the entire story of Mockingbird in much the same way that brokenness is central to the Christian faith--Jesus' body was broken on the cross for our sin, and it is through his life, suffering, death, and resurrection that we have access to God's grace.

However, I do have to mention that theologically, I do have some big, BIG issues with Rawle's writing.  Issues that I can't comfortably ignore.


God looked at the formless void and said, "Let there be," and "Let there be" is quite different from "There shall be." God creates through permission. God allows the waters to bring forth swarming creatures. God allows the earth to produce vegetation and creeping things. God's words are powerful not because of forced limitation. God's Words are powerful because of their unbound potential and invitation. God invites creation to participate in its own formation.


If even Jesus claims he isn't good, then I'm off the hook, right? Jesus is pointing us to the truth that striving for personal perfection isn't required; rather, what we need is the perfecting grace of God.

Both examples are troubling, both interpretations read things into the biblical passages that just aren't there. (Luke 18:18-19; Genesis 1) And those are just two, there were plenty of other "iffy" statements throughout.

The Faith of a Mockingbird is one of the titles in the Pop in Culture series by Abingdon Press. Other titles include Hollywood Jesus and The Salvation of Doctor Who; both by Matthew Rawle. About the series, he writes, "I truly believe we are called not to reject the culture we live in, but to re-narrate its meaning--to tell God's story in the midst of it."

© Becky Laney of Operation Actually Read Bible
Posted by Becky at 11:16 AM

Matt Rawle should be ashamed. The cover of "The Faith of a Mockingbird" includes text from Harper' Lee's book, "to Kill a Mockingbird." There is no footnote crediting Harper Lee with the text. I watched the first video for group study. Matt Rawle speaks for seven minutes about characters in the book and never mentions Harper Lee's name once! It is not fair to use the works of others without attribution.