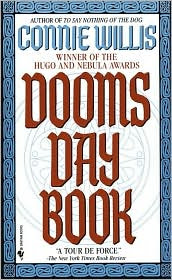 Doomsday Book by Connie Willis is one of my favorite, favorite science fiction books. Why? Well, for one thing it combines two genres that I love: historical fiction and science fiction. This time travel book is set primarily in the future (a future where time-traveling exists and historians are, in fact, time travelers) and in the past. Kivrin, our heroine, our historian, has spent years preparing for her first trip to the past, her first "drop." She'll also be the very first historian to travel to the fourteenth century, a century deemed highly unsafe. Though Gilchrist (and his school) have recently decided to allow--even encourage--travel to this century, one man, one professor, Mr. Dunworthy thinks its foolish, utterly foolish to do so. Who will prove correct? Mr. Gilchrist or Mr. Dunworthy? Kivrin wants to go so badly that she believes Mr. Dunworthy is over exaggerating or over-emphasizing the risks and dangers because he is a worrier. The book alternates between the two stories: the past and the present (an imagined future). Both stories are intense and compelling and well-crafted or plotted.

So why mention the book here at Operation Actually Read Bible? Faith and religion play a role--readers can decide for themselves how big or how small a role that is--in this book. The book is set during Advent and Epiphany. The book features at least one church service in the present--the future that is--and references several other "contemporary" services. In addition, one of the main characters in the past is Father Roche, and we see him minister to his village in many, many ways. (Also a few church services.) There are several places in the novel where the two main characters Mr. Dunworthy and Kivrin share with readers exactly WHAT they think about God. For these reasons, I think it isn't a stretch to bring up faith and religion and theology when discussing the book. It's almost natural. Addressed in the book:


Kivrin's response is one overall of frustration. She seems to be thinking: Don't waste time on God, on trying to find God, trying to find God's meaning or God's purpose in this or that circumstance, don't look for God to deliver you, to comfort you, to support you. At one point in the novel she records a conversation with Father Roche and forms a conclusion:


"Why does God punish us thus?" he asked me.
"He doesn't. It's a disease," I said, which is no answer, and he knows it.
All of Europe knows it, and the Church knows it, too. It will hang on for a few more centuries, making excuses, but it can't overcome the essential fact--that He let this happen. That He comes to no one's rescue. (480)


God did know what would happen. It did not come as a surprise, a shock. And it wasn't that God knew that something like that might happen if Jesus became flesh and blood. The cross and the empty tomb was not a matter of "making the best of a bad situation" or scrambling around to find plan B or plan C. The cross was part of God's plan, God's design before the foundations of the world. God knew EXACTLY what was in store for his Son. And the Son knew too. Nothing takes God by surprise. Ever. Why did God send His Son? Why was the Incarnation necessary? Why was God becoming one-of-us, living as one-of-us part of God's original design, his long-prophesied rescue plan? That's almost begging for another post. But essentially the answer is you-and-me. We are in need of a Savior. We are dead in our sins. We are unable to save ourselves. We are unable to rescue ourselves. We don't even know our need, or the depth of our need. Jesus came to save sinners--sinners like you, sinners like me. God loved us with a costly love, a sacrificial love. Our rescue did not come cheap--grace is not cheap. It speaks to God's love, his astounding, amazing, mysterious love. But God SENT HIS SON knowing exactly where it would lead. Funny how Dunworthy focused exclusively--in his glum state--on the crucifixion not on how the story ended--with the glorious resurrection and the ascension.

I do want to say that overall, I enjoy the book very much. I think it's a great read. But it is not theologically flawless!!! I wouldn't expect it to be really.