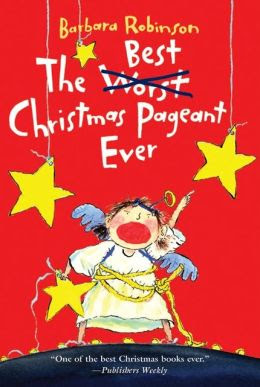 The Herdmans were absolutely the worst kids in the history of the world. They lied and stole and smoked cigars (even the girls) and talked dirty and hit little kids and cussed their teachers and took the name of the Lord in vain and set fire to Fred Shoemaker's old broken-down toolhouse.

Let me ask you a question. Who is the gospel for? Think about it if you want. I'll wait.

On one hand, The Best Christmas Pageant is a comedy through-and-through. It's narrated by a child who's been tormented by the Herdmans for years. And it captures all the reactions of a town to all the bad stuff the Herdmans do (and say). The narrative voice, for most of the book, is just hysterical.


The saying is trustworthy and deserving of full acceptance, that Christ Jesus came into the world to save sinners, of whom I am the foremost. 1 Timothy 1:15

And when the Pharisees saw this, they said to his disciples, “Why does your teacher eat with tax collectors and sinners?” But when he heard it, he said, “Those who are well have no need of a physician, but those who are sick. Go and learn what this means, ‘I desire mercy, and not sacrifice.’ For I came not to call the righteous, but sinners.” Matthew 9:11-13

The Best Christmas Pageant Ever provides an inside-out look at the nativity story, and captures best why Christ came in the first place.

It is told from the "inside" Christian perspective, a Christian perspective with varying degrees of self-righteousness. That is some characters are presented as more self-righteous than others. But many characters are a bit blind. They have never thought of the gospel as being for the Herdmans. They see themselves as better--significantly better--than those Herdmans!

As if God's grace wouldn't dare include the Herdmans. Jesus die for the Herdmans????? You've got to be kidding, right???? Not them, Lord! Why, that's ridiculous. But the truth is, it's ridiculous for God to save any one of us. None of us--not one of us--merits God's salvation: his mercy and grace.

I liked seeing the Christmas story from a new angle.


They knew that Christmas was Jesus' birthday, but everything else was news to them--the shepherds, the Wise Men, the star, the stable, the crowded inn. It was hard to believe. At least, it was hard for me to believe--Alice Wendleken said she didn't have any trouble believing it. "How would they find out about the Christmas story?" she said. "They don't even know what a Bible is." (55)

I couldn't believe it. Among other things, the Herdmans were famous for never sitting still and never paying attention to anyone--teachers, parents (their own or anybody else's), the truant officer, the police--yet here they were, eyes glued on my mother and taking in every word. (59)

When we got home my father wanted to hear all about it. "Well," Mother said, "just suppose you had never heard the Christmas story, and didn't know anything about it, and then somebody told it to you. What would you think?" (68)


© Becky Laney of Operation Actually Read Bible
Posted by Becky at 11:30 AM