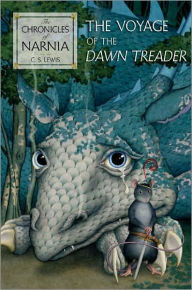 Is Voyage of the Dawn Treader by C.S. Lewis my absolute favorite, favorite of the Chronicles of Narnia series? Almost, yes. It is at the very, very least my second favorite. The only other book that even comes close is the FIRST book in the series, The Lion, The Witch, and The Wardrobe.

Returning to Narnia in The Voyage of the Dawn Treader is Lucy and Edmund. The two siblings are joined by a cousin, I believe, Eustace. Lucy and Edmund are quite happy to be reunited with Prince Caspian--now King. Eustace is shocked and angry and irritable. The last place he wants to be is in Narnia. Or should I say on a Narnian ship, sailing with a Narnian crew, led by a Narnian king. Eustace himself doesn't actually step foot into Narnia--the country--at least not in this book. Readers will remember quite a few characters from Prince Caspian.

Caspian is on a mission to find out the fates of seven lords who were loyal to his father, lords that have been missing for over a decade if not two. Caspian is sailing from island to island making inquiries, and exploring new lands and countries. This can be risky and dangerous...

Does Aslan make an appearance? Yes!!! And it's probably one of my favorite, favorite scenes. Eustace and Aslan have some business between them! If Eustace hadn't been turned into a literal dragon, would he have been beastly forever? Probably. Turning into a dragon, changed, him for the better!

The book is a lovely adventure, and, a joy to read.

© Becky Laney of Operation Actually Read Bible
Posted by Becky at 11:01 AM