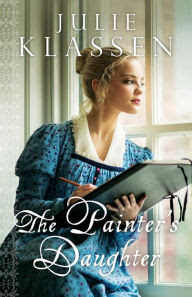 Sophie, the heroine, is "the painter's daughter." Before the novel opens, she had been acting as her father's apprentice, helping him with his work, and meeting fellow artists, including visiting artists to the area. One visiting artist was Wesley Overtree. She catches his eye; his flattery leads to her becoming his muse, his model. That soon leads to trouble--to pregnancy. Before she can tell him the news, however, he's ready for a new muse and a trip to Italy. I do think it's worth noting for readers that this relationship, this pregnancy, occurs before page one. There were several flashback scenes, but, unlike Lady Maybe, it was not overly detailed and in-your-face with graphic descriptions.

She does. For better or worse. And the two set off to elope. For he only has two weeks before he's due back with his regiment. He doesn't have enough time for banns to be read properly. The two then visit her parents and then his parents. She will remain with his family while he's serving his country…

Will Sophie continue to long for what might have been? Will she hold onto her feelings for Wesley? Or will she open her heart again and fall in love with her husband?

I enjoyed the characterization in this one! Sophie, Stephen, Wesley, Kate--the sister, his grandfather, his parents, a few of their neighbors and family friends. So much was happening, and it was a quick, enjoyable read for the most part.

It was decidedly Christian as well. It explored what grace and forgiveness are all about. And there was at least one or two presentations of the gospel.

© Becky Laney of Operation Actually Read Bible
Posted by Becky at 9:44 AM