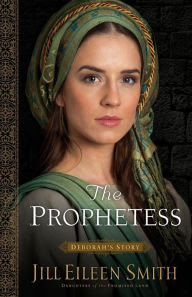 The Prophetess is a retelling of Judges 4 and 5.


And the people of Israel again did what was evil in the sight of the Lord after Ehud died. And the Lord sold them into the hand of Jabin king of Canaan, who reigned in Hazor. The commander of his army was Sisera, who lived in Harosheth-hagoyim. Then the people of Israel cried out to the Lord for help, for he had 900 chariots of iron and he oppressed the people of Israel cruelly for twenty years.
Now Deborah, a prophetess, the wife of Lappidoth, was judging Israel at that time. She used to sit under the palm of Deborah between Ramah and Bethel in the hill country of Ephraim, and the people of Israel came up to her for judgment. She sent and summoned Barak the son of Abinoam from Kedesh-naphtali and said to him, “Has not the Lord, the God of Israel, commanded you, ‘Go, gather your men at Mount Tabor, taking 10,000 from the people of Naphtali and the people of Zebulun. And I will draw out Sisera, the general of Jabin's army, to meet you by the river Kishon with his chariots and his troops, and I will give him into your hand’?” Barak said to her, “If you will go with me, I will go, but if you will not go with me, I will not go.” And she said, “I will surely go with you. Nevertheless, the road on which you are going will not lead to your glory, for the Lord will sell Sisera into the hand of a woman.” Then Deborah arose and went with Barak to Kedesh. And Barak called out Zebulun and Naphtali to Kedesh. And 10,000 men went up at his heels, and Deborah went up with him. Judges 4:1-10.

The villagers ceased in Israel;
they ceased to be until I arose;
I, Deborah, arose as a mother in Israel. Judges 5:7

One of the strengths of the novels is it brings to life this particular verse: he oppressed the people of Israel cruelly for twenty years. Readers see the effect of this oppression, how all "normal" activities and freedoms had been suppressed by an ever-present fear. Men were killed--slaughtered. Women could be raped, killed, kidnapped and sold into slavery, tortured. Man. Woman. Boy. Girl. All were at risk as perishing at the direct hands of their enemy who would show no mercy. They seemed powerless; the situation seemed hopeless. But some began to pray. Their prayers most likely were not answered immediately. But they did not pray and wait in vain.

In the biblical account, readers learn a little about Deborah, Barak, and Jael. Jill Eileen Smith added dozens of characters to the novel. Readers spend a LOT of time with Deborah's family. Her husband, her two sons, her daughter-in-law(s), her daughter. Readers spend the most time with her daughter, Talya. For better or worse. I have to admit that I really struggled to tolerate Talya! Her "I can do anything" "I can be anything" "I can take care of myself" attitude bothered me because it fueled her outright rebellion and disobedience. When most men and women were timid to leave their homes and fields--at least alone--her I can go where I want, when I want, I'm not afraid of enemy armies attitude seemed not brave but foolish. When most everyone else respected Deborah and followed her decisions and/or advice--she was the prophetess after all--Talya stood apart as disregarding almost everything her mother said.

One of my favorite characters was Jael. I thought the author did a great job in including Jael, her husband Heber, and their children (grown up children) into the story.


But Sisera fled away on foot to the tent of Jael, the wife of Heber the Kenite, for there was peace between Jabin the king of Hazor and the house of Heber the Kenite. And Jael came out to meet Sisera and said to him, “Turn aside, my lord; turn aside to me; do not be afraid.” So he turned aside to her into the tent, and she covered him with a rug. And he said to her, “Please give me a little water to drink, for I am thirsty.” So she opened a skin of milk and gave him a drink and covered him. And he said to her, “Stand at the opening of the tent, and if any man comes and asks you, ‘Is anyone here?’ say, ‘No.’” But Jael the wife of Heber took a tent peg, and took a hammer in her hand. Then she went softly to him and drove the peg into his temple until it went down into the ground while he was lying fast asleep from weariness. So he died. And behold, as Barak was pursuing Sisera, Jael went out to meet him and said to him, “Come, and I will show you the man whom you are seeking.” So he went in to her tent, and there lay Sisera dead, with the tent peg in his temple. Judges 4:17-22.

The book concludes with a bit of romance and celebration. Deborah has composed her song, taught it to the Israelites, and all seems to be well--for the moment. Things never stay well in the book of Judges however!!!