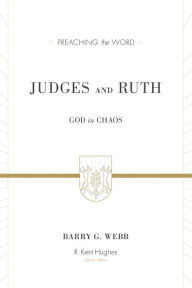 Judges and Ruth: God in Chaos is the third book I've read in Crossway's Preaching the Word commentary series. (The other two books I've read are Isaiah: God Saves Sinners and John: That You Might Believe.) This title released just a few months ago--late Fall 2015. Though I knew it would require a time commitment, I knew that it would prove worth it in the end.

Judges is not a "happy" book. It is strange, violent, offensive, depressing. Webb sums it up by calling it chaotic. Readers meet lost people greatly in need of saving; people who do whatever they want, whenever they want, without really ever considering if it's right or wrong, good or bad, wise or foolish. It is very much a book showing the consequences of sin, of immoral lifestyles. But Webb points out that it is also a book illustrating God's grace and mercy. He emphasizes the fact that God pities the Israelites even when they don't repent, even when they don't return to following and worshipping him. It is not a cyclical book where they have a change of heart, and, God seeing that they deserve his favor, decides to rescue them. No, they don't deserve or merit a rescue. But God loves them in spite of their sins, their hard-heartedness, their inabilities. God is a gracious God who saves. Yes, he's a God who judges between right and wrong, a God that loves justice and will act justly at all times. Readers meet judges--human judges--that are often just as flawed as the people they're "saving" or "leading." One never gets the idea or impression that God is super-impressed by them. Rather that God uses imperfect people, that God can turn our very weaknesses into strengths. Perhaps strengths is the wrong word. What I mean is that the very fact that we, on our own, CAN'T do something gives God the perfect opportunity to show what weak, foolish, imperfect people can do when they're filled with the Spirit of God and His power is flowing through them into their lives and situations. God is GREAT. God is POWERFUL. God ACTS. He acts on behalf of HIS people. They are his because he wants them to be, declares them to be, calls them to be.

Is it a commentary? a proper commentary? Yes and no. It does cover each chapter of the book of Judges (and Ruth). But it doesn't cover each chapter, verse by verse by verse. It is a series of expository sermons covering each and every chapter of Judges (and Ruth). For those interested in reading and studying the entire Bible, it's a great book. Perhaps for those just interested in looking up more information on a specific verse or passage--as a reference book--it might not be the best resource.

I do love how this book shows how relevant the Word of God remains, in particular, of course, the book of Judges and Ruth. It isn't always "obvious" how a book like Judges can still speak to us, and apply to us today. But Webb does a good job.

Judges and Ruth are both books for our times, an age of individualism when every man or woman does what is right in his or her own eyes, when love has been divorced from commitment, and when people need more than ever to discover, or rediscover, the redeeming love of God in Christ.

Doing something that is inconsistent with being faithful to God can always be made to sound reasonable, but it is always wrong. And in our own day the temptations to do so are legion, and often very subtle. Under the pressure to act “kindly” (1: 24), to be tolerant, we can begin to compromise our commitment to the uniqueness of Christ and the truth of the gospel, especially in the pluralistic context in which most of us now live, in which truth is relativized and tolerance is promoted as the supreme virtue. But, of course, it is all a lie. Tolerance is a relative, not absolute virtue. Whether or not it is good depends on what is tolerated. To tolerate evil, however attractively it is packaged, is to bed with the devil and make a covenant with death. It is to be unfaithful to the Lord who saved us and rightly demands our obedience, and when we do it we lose strength, vitality, and victory. We lack moral strength, find ourselves weak in the face of the enemy, and end up weeping and ashamed. And if we manage to preserve some appearance of virtue in this life, a day will come when we will stand before the God we have betrayed and be exposed for the shams we have become.

What is evil in the eyes of human beings is a matter of personal judgment: what one person considers evil another person may not. But what is evil in the sight of the Lord is unambiguously evil— it is that simple. The Lord is the one described in Genesis 2 as the Lord God, the Creator of human beings, and therefore one who has the absolute right to distinguish right from wrong and determine the bounds within which life is to be lived. He who ordered the physical universe by his word, separating heaven from earth, light from darkness, and land from sea (Genesis 1), also separated right from wrong by that same word (Genesis 2). To do what is evil in his sight is to repeat what Adam and Eve did in Genesis 3. It is to commit the primal sin, the one sin that is the source of all others, to declare one’s solidarity with fallen humanity in its defiance of its Creator. It is to choose moral autonomy. But in reality this is not to choose another good— an alternative and equally valid morality— but to do evil.


© Becky Laney of Operation Actually Read Bible
Posted by Becky at 9:29 AM