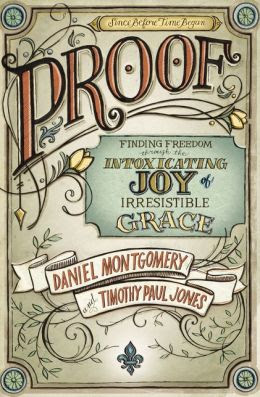 
Performance — work and reward — is one of the basic structures of our lives. As a result, we grow up thinking, “I am what I am because of what I do . . . or because of what I’ve failed to do.” But what if we told you that it’s all a lie? What if we proved to you that, when you stake your identity on your performance, you’re delusional. Better yet, what if we told you a truth that can get you free from this lifelong delusion?

I loved, loved, loved, LOVED, LOVED this one. I first reviewed it in 2014. I decided to reread it again this year. I'm so glad I did.

What is it about? The gospel--the amazing, beautiful, glorious gospel.


The gospel is the good news that God’s kingdom power has entered human history through the life, death, and resurrection of Jesus Christ. When we repent and rely on his righteousness instead of our own, his kingdom power transforms us, and we become participants in the restoration of God’s world.
The three aspects of the gospel are the kingdom, the cross, and God’s grace. 1. The gospel of the kingdom is life with God under God’s rule. 2. The gospel of the cross is the life, death, and resurrection of Jesus by which God accomplishes our salvation, rescues us from his wrath, incorporates us into his people, and inaugurates his reign in the world. 3. The gospel of grace is the wonderful news that God accepts us, shares his life with us, and adopts us as heirs of his kingdom not because we have earned it or deserve it but because God chooses to give all of this freely at Christ’s expense.


Whenever we talk about PROOF, we’re referring to an acronym that summarizes five key facets of God’s amazing grace. PROOF reminds us of five different ways in which we experience the grace of God at work in our lives


Before time began, God mapped out the plan of salvation from first to last. God planned to adopt particular people as his own children; Christ offered himself as a sacrifice for these people’s sins and as a substitute who satisfied God’s righteous requirements in their place (John 10:11-18; Ephesians 1:4-12).


Everyone is born spiritually dead. Left to ourselves, we will never choose God’s way. God enables people to respond freely to his grace by giving them spiritual life through the power of Christ’s resurrection (John 5:21; Ephesians 2:1-7).


God chose people to be saved on the basis of his own sovereign will. He didn’t base his choice to give us grace on anything that we did or might do (John 15:16; Ephesians 2:8-9).


God chose people to be saved on the basis of his own sovereign will. He didn’t base his choice to give us grace on anything that we did or might do (John 15:16; Ephesians 2:8-9).


God seals his people with his Holy Spirit so that they are preserved and persevere in faith until the final restoration of God’s kingdom on the earth (John 10:27-29; Ephesians 1:13-14; 4:30).

Some of my favorite quotes:


The empty wisdom of human religion proclaims, “What goes around comes around. God helps those who help themselves. You get what you pay for” — but these are lies that lead only to bondage and despair. The gospel of grace speaks an entirely different word, a word that’s filled with paradox and mystery. By God’s grace, we get what someone else paid for. By grace, God helps those who not only can’t help themselves, they don’t even want to. By grace, what goes around stops at the foot of the cross, never to come around again.

The message of planned grace begins with the truth that God is a loving Father who chose us personally and specifically before time began. It continues with the truth that God is a loving Bridegroom who has accomplished everything necessary to win the heart of his beloved bride. God didn’t plan for Christ’s work on the cross to extend a certain distance only to discover later that his creatures have somehow thwarted his good intentions. God’s grace always goes precisely as far as God planned.

When did God choose to love and save his people? God planned to love and save his people before the creation of the world. This is planned grace. God maps out our rescue from start to finish (Ephesians 1:4–5). The Son didn’t just make the world savable — he secured salvation for every individual who repents and believes. The value of his suffering was more than sufficient to atone for every person in the world, but God planned for his death to purchase particular people from every nation.

Spiritual zombies don’t choose the gift of God’s grace for the same reason that prison escapees don’t show up voluntarily at police stations. It isn’t because convicted felons are incapable of locating their local law-enforcement agency. It’s because the police represent everything the convict wants to avoid. Ever since our expulsion from Eden, every human being has been a convicted corpse on the run from God’s reign. Apart from God’s single-handed gift of resurrecting grace, no human being will ever seek God because a death-defeating King who demands that we find our greatest joy in his Father’s fame is repulsive to the spiritually dead (John 3:19 – 20; Romans 3:11).

The sovereign king of the cosmos isn’t waiting on a permission slip from humanity before he resurrects spiritual zombies — and he certainly isn’t pacing the portals of heaven, wringing his hands, hoping someone responds positively to his invitation to the celestial prom. God powerfully sends his church to proclaim the gospel in every nation. As the gospel is shared, God’s Spirit pierces the lives of particular people who are spiritually dead and exchanges their death for his life (Acts 2:37; 13:48; Colossians 2:13).

God’s choice to save you had nothing to do with anything that you have done or will do. You did nothing to gain God’s favor, and there’s nothing you can do to keep God’s favor. All that you can do — which is really no “doing” at all — is to receive what God in Christ has already done. It’s only when we realize that nothing we did or might do formed the basis of God’s choice to save us that we truly taste the intoxicating joy of God’s irresistible grace.

The God of the Scriptures is no debonair gentleman who waves to us from the opposite side of a chasm, hoping we will find it in our hearts to respond. In Jesus Christ, God himself crossed the chasm between himself and humanity (John 1:14; 12:27). He came as a righteous shepherd who sacrifices his life to snatch his sheep from the jaws of the beast (Ezekiel 34:10; Matthew 18:12 – 14; John 10:11 – 15). He entered space and time as a sovereign lord in humble disguise, seeking to transform a broken woman into his pure and perfect bride (Ezekiel 16:1 – 14; Hosea 3:1; Ephesians 5:25 – 27). He came as a medic on an emergency mission to breathe life into sin-infected souls (Mark 2:17). Now, through the power of his Spirit and the proclamation of his gospel, this same Jesus is shattering every resistance to his reign in the lives of those he has chosen. He is planting outposts of his kingdom where love and justice grow, and he is beginning the healing of his people’s sin-infected souls. Jesus Christ came to seek and to save his people who were lost, and he isn’t asking anyone’s permission to finish this mission (Matthew 1:21; Luke 19:10). That’s the power and the beauty of overcoming grace.

Christ’s commitment to his people does not depend on our capacity to remember, but on God’s capacity to sustain us and preserve us. It depends on a covenant that has been engraved in flesh and confirmed in blood.


© Becky Laney of Operation Actually Read Bible
Posted by Becky at 10:11 AM