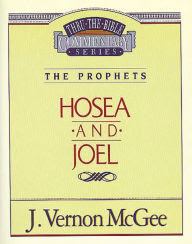 I have enjoyed reading a handful of J. Vernon McGee's Thru the Bible commentaries. Primarily I enjoy them because they are not overly scholarly, his writing style is casual, conversational, very reader-friendly. In fact, you can hardly go a few pages without him calling the reader--MY FRIEND.

Who was J. Vernon McGee? He was a minister with a radio show. Yes, was; he is among the "cloud of witnesses." He lived 1904-1988. On his radio show, he preached THRU THE BIBLE, giving attention to each book of the Bible, each chapter of the Bible. His programs still air on Christian radio, and, are available online as well in various places. The radio show covers the Bible--Genesis through Revelation--in five years. You can download individual books of the Bible.

Are his messages still relevant? I say YES. Any preach who holds onto absolute truth, holds fiercely to absolute truth, will always be relevant. That being said, do I believe 100% with each and every sentence he ever wrote or ever spoke. I wouldn't go that far. I don't know that I'd say that about *any* Christian minister or writer.

Favorite quotes from his commentary on Hosea:


Oh, my friend, what a picture this is of our Savior. He created us and we belong to Him.

Then we were guilty of going from Him and giving our love, our affection, our time, to the things of the world. And while we were yet sinners, He came down to this earth and bought us in our ugly condition that He might make us His legitimate children. What love!

My friend, it is not enough to be correct in your doctrine and be active in your service for Christ. These are important and have their place, but the essential thing is love. Have you left your first love? Do you love him today?

My friend, when you turn your back on the one who so loved the world that He gave His only begotten Son, you are not only doing something bad, you are not merely turning away in unbelief, you are committing the greatest sin of all. You are turning away from a God who loves you and died for you. There is no other sin equal to that.

I wish the pulpit today were a little stronger than it is. We all are trying to be very nice and, as a result, we sometimes do not speak as strongly as the Word of God does.

The greatest sin in all the world is to forget God.

Do you know that you and I are redeemed? The picture here is not very pretty--that is the reason it is not being preached more today. We hear a great deal in conservative circles about dedication, about commitment, and about turning your life over to the Lord. But, my friend, the first thing you need to do is to come as a sinner to God--He has to redeem you. Just as Hosea bought this harlot, that is the way God redeemed us. Until you and I see that, we can know nothing of real commitment to God.

Gomer wasn't worth it, and we are not worth the redemption price which was paid for us...He had to shed His blood; He had to suffer and die that you and I might be redeemed. Why? Because we were lost sinners, sold under sin.

And until we have come to God for salvation, you and I are dead in trespasses and sins. We have no life to commit to Him. Until the sin issue is settled--until we are born again and have received a new nature--we can do nothing that is pleasing to God.

IF a so-called church has a man in the pulpit who denies the Word of God, denies the deity of Christ, and denies that He died for sinners, it is not a church. It is a brothel--a spiritual brothel.

The message of chapter 4 is that Israel is guilty of lawlessness, immorality, ignorance of God's Word, and idolatry...I believe that you could interchange these same sins of Israel with the sins of our own nation.

My friend, if you are a Christian, the minute you get away from the Word of God, you are doomed to failure in the Christian life.

God says you do not get by with sin. He is judging sin, and He will continue to judge sin, my friend.

Today many are saying, "Out with religion," and I say, fine, let's sweep it out the book door, and let's invite Jesus Christ, the Light of the world, to come in.

In other words, the priests in refusing to give the people the Water of Life and the Bread of Life were actually committing murder. To be honest with you, I think that a minister who stands in the pulpit and does not give out the Word of God is guilty just as it is stated right here. I did not think that up--it is the Word of God which says that.

The most important business the church has is to get out the Word of God.

My friend, God has no other way to save you except by the death of Christ. You may think you have two or three different ways to save yourself, but God has but one way.


Favorite quotes from his commentary on Joel:


The Day of the Lord is a technical expression in Scripture which is fraught with meaning. It includes the millennial kingdom which will come at the second coming of Christ, but Joel is going to make it very clear to us that it begins with the Great Tribulation Period, the time of great trouble. If you want to set a boundary or parenthesis at the end of the Day of the Lord, it would be the end of the Millennium when the Lord Jesus puts down all unrighteousness and establishes His eternal kingdom here upon the earth.

My friend, the only way we can come to Him is to come as sinners wanting to turn from our sins. If you have been turning from God and now will turn to God, all you have to do is call upon Him and He will save you.

God is glorified when He judges sin just as much as He is when He saves a sinner. That is hard for us to believe; it is a bitter pill for man to swallow. God is holy, and a holy, righteous God is going to judge.


© Becky Laney of Operation Actually Read Bible
Posted by Becky at 11:00 AM