Book Review: The Answer To Bad Religion is Not No Religion 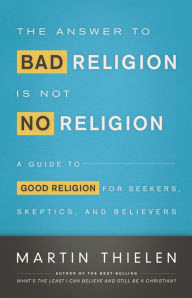 I thought I'd open this review with some words from J. Vernon McGee:


Today many are saying, "Out with religion," and I say, fine, let's sweep it out the back door, and let's invite Jesus Christ, the Light of the World, to come in. (Thru the Bible, Hosea)

Many people wear religion like you would wear a loose fitting garment; it is something they can put on or off at any time. (Thru the Bible, Hosea)

My friend, religion has been the most damning thing this world has ever experienced. Religion has damned the world… Throughout history religion has not helped us but only crippled and damned the human race. Only the Lord Jesus can deliver us. (Thru the Bible, Hosea)

There is a difference between "religion" and the Christian faith--being a Jesus follower. When Christianity is a mere "religion" it can be all shades between "good" and "bad".

I began this review with a digression, I know, so let's get back to the book in question: The Answer to Bad Religion is Not No Religion: A Guide to Good Religion for Seekers, Skeptics, and Believers.

Quite simply his argument is: Religion is turning off people of all ages all across America. He has even been turned off by religion in his own personal life. He has concluded that much of religion is "bad," but argues that it doesn't have to be that way. That "good" religion is to be found. People can find places to suit them to worship. They just have to look in the right places.

One can't tell from the basic premise how he defines "bad religion" and "good religion." It is all a matter of perspective. He's writing what he knows, what he believes. It is his book, after all, and "good" and "bad" are certainly prone to subjectivity. Within a few pages, I got a good idea of where he was heading. I was disappointed, but, not surprised, not really.

I don't want to rush in and say that everything in the book is theologically wrong, or, that he is never, ever, ever right. Sometimes his conclusions contain (some) truth at least, but his reasoning--his system of working it out--is faulty. Sometimes his observations were true (mostly true) but he somehow came to the wrong conclusions.

For example, you could say he has strong, negative feelings for anyone who holds the Bible to be infallible or inerrant. He claims this is not the historic Christian position. (That this is an invention of the twentieth century.) If you hold the Bible to be a divine book, a book that is God-breathed, a book that is all true and not just mostly true or sometimes true, then he is quick to judge you.

The root of most "bad religion" in his opinion is people who take the Bible too seriously. His examples are not just pushing the extreme, but pushed to the very extreme. "Christians" who are loud, arrogant, rude, wear offensive t-shirts, carry offensive signs, joke about killing people, laugh about people burning in hell for eternity. People defined by hate, hate, bitterness, anger, and did I mention, hate. What I found disturbing is that he presents this--it seems he presents this--as the normality. "All Christians who hold the Bible to be infallible and God-breathed" are like this.

The only Christians who are loving, compassionate, given to service, joyful, thankful, humble, fun-to-be-around ARE those who have rejected certain claims about the Bible, and have a better "informed" faith that is more open-minded, inclusive, and tolerant. Those willing to embrace ambiguity and mystery and reject certainty. (Now for the record, there are hundreds--if not thousands--of mysteries that we will never know this side of eternity. And I am not claiming that anyone can fully, absolutely, completely grasp or understand the heart-and-mind of God as He really is. But, for example, to deny there are certainties in the Bible is pushing it too far. God has revealed who He is. He has given us a book--the Bible--and given us His Spirit, the Holy Spirit. So we can know some things without doubt.) Also the author believes that the Bible is full of contradictions, contradictions that cannot be explained or reconciled.

Now, to clarify, he is not denying that the Bible is important, or denying that the Bible is a significant, potentially life-changing book. He affirms its inspired-ness. But I got the sense, I could be wrong, that the way he uses the word "inspired" does not mean God-breathed, God-authored. But instead means, "I was inspired to write this poem by my walk in the woods." "I was inspired to write this song for the most beautiful woman in the world, my wife." In other words, perhaps more like how a movie is "inspired" by "true events."

For example, I believe his argument was that the human authors were trying their best--to the best of their limited ability--to write true things of God, to write what they understood at that time, in that place, to be true of the God they worshiped. But not being God, they sometimes got things wrong. Of course, they sometimes got things right. It was up to future generations to "correct" misconceptions and "fix" the faith so that it better reflected what they themselves thought was true about God. And so it is to this day. "The God I worship would not…."

His way of understanding or comprehending what is meant by a "literal view of the Bible" is a bit frightening. I don't think he did his opponents justice in representing what they actually believe. Or perhaps there are a dozen ways one could theoretically take the Bible literally--and he assumes that the weakest, most ridiculous one is the only one. There are probably hundreds of books on how to read the Bible that would clarify the subject. He misunderstands quite a few things that are basic to reading and interpreting the Bible.

Some core (essential) doctrines he appears to sincerely, legitimately believe and hold closely and respectfully. For example, the resurrection of Jesus Christ, and the hope of our future resurrection. I say appear not to be sarcastic--I'm not trying to be--but because he probably clarifies and explains his beliefs a lot better in a previous book that I've not read.

If there is a section of this one that comes closest to the truth--something I view as absolute, and something he would view as relative, I'm sure--it is his section on "good religion." He makes a few good points now and then. One chapter that I agreed with most of the time was on nominal commitment to Christ and the church.


Believing in a literal Bible is not necessary for Christian believers. in fact, believing in a literal Bible should not be affirmed by Christians, for precisely the kinds of reasons my young visitor laid out. A more faithful Christian response is to take the Bible seriously but not always literately. In fact, The Bible never claims to be perfect or infallible or inerrant. It claims only to be inspired. Although I believe in biblical inspiration and authority, the Bible is also a human document with human limitations, including a prescientific worldview.

© Becky Laney of Operation Actually Read Bible
Posted by Becky at 9:21 AM