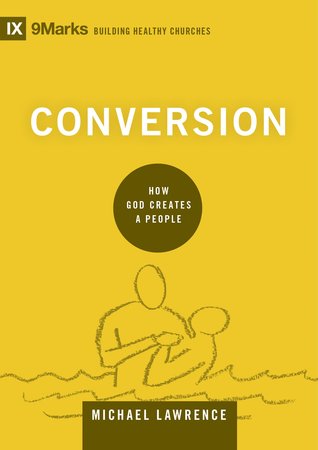 First sentence from chapter one: In the introduction, I mentioned my friend who was concerned that his well-mannered adult children weren’t really Christians. You might say they were nice, but not new—not new creations. His experience raises questions about the doctrine of conversion, as well as what that doctrine should look like in the life of a church. It’s crucial to get both our doctrine and our practices right. Churches should believe that God makes people radically new, not just nice, through conversion. But they should be able not only to write this out on paper, but also to live it out. What does that look like? In two of the most important passages in Scripture for understanding conversion, both the prophet Ezekiel and Jesus help us answer that question.

Essentially in his book, Lawrence does two things. First, he unpacks the doctrine of conversion. He explains what it is and what it isn't. Being a new creation, being born again, isn't becoming nicer or more moral. It is an act of God--a miracle. Second, he argues that a rightly held doctrine should be rightly applied in our churches, in our homes, in our neighborhoods. Our doctrine of conversion, of regeneration, is closely related to our doctrine of evangelism and missions. And if we hold contradictory doctrines, there's a big problem that we need to address and that we ultimately need to change!

Lawrence in his own words,

If conversion means that we are made new through the sovereign, saving work of God that results in a complete reorientation of our hearts in worship, what difference should that make? To begin with, it means that we are not healed therapeutically. Instead, we actually become holy. What does it mean that Christians are holy? It doesn’t mean that Christians are better than others. It doesn’t mean we can adopt a “holier-than-thou” attitude. It doesn’t mean that we’re rule keepers, whether those rules come from the fundamentalist right or the progressive left. Rather, a Christian is holy because he or she has been (1) set apart (2) to a new master (3) with a new love.

Lawrence challenges his readers to rethink how they understand and apply doctrine.

For example, Lawrence points out some of the signs on how to tell if we have been misapplying doctrine. If we've been accidentally teaching the doctrine of nice instead of the doctrine of rebirth.
In another chapter, Lawrence describes what a false convert looks like. He writes, "Often, it is someone who...

Some of his definitions:

Evangelism is faithfully communicating an authoritative message from God. It is that message that warns us about our very real need, whether we feel it or not. It is that message that requires a very particular response. And it is that message that, remarkably, converts sinners like you and me by the power of the Holy Spirit. So the question to ask is not, how do we make the sale? It is, how can we communicate the message? The challenge is not technique, but faithfulness and clarity. The gospel has a definite content. The heart of the gospel is that Jesus died and rose again as a substitute for sinners, appeasing God’s just wrath and reconciling us to himself. When we advertise the felt-need benefits of the gospel and neglect the core content of the gospel, we’re not doing biblical evangelism but something less.

Repentance is not a feeling. Repentance is being convicted by the Holy Spirit of the sinfulness of our sin—not the badness of our deeds but the treachery of our hearts toward God. Repentance means hating what we formerly loved and served—our idols—and turning away from them. Repentance means turning to love God, whom we formerly hated, and serving him instead. It’s a new deepest loyalty of the heart. If repentance really is a change of worship, then our churches must not pressure people to make hasty, illconsidered “decisions” for Jesus, and then offer them quick assurance. Instead, we must call people to repent. When we separate repentance from conversion, either because we think it can come later or we fear scaring people off, we reduce conversion to bad feelings or moral resolve. Worse, we risk assuring a “convert” that he is right with God when in fact he is not. It’s almost like giving someone a vaccine against the gospel.

Christian faith is wholehearted trust that God will keep his promises in the gospel. Real faith leans, and depends, and follows, and works. True faith unites itself to a local church even as it unites itself to God. Genuine faith has three aspects to it. First, there’s knowledge. You can’t believe something you don’t know. Second, there’s agreement. It’s not enough to know the claim that Jesus lived, died as a substitute, and then rose from the dead. You have to agree with it. But third, there is also personal trust. It’s not enough to know and agree that chairs are for sitting. Faith means sitting down and trusting the chair with your weight.

His book is packed with truth that we need to hear and hear often. Some of my favorites:

My thoughts: I thought this was a wonderful refresher. I would definitely recommend this one. I remember vividly when I first learned of the (reformed) doctrine of conversion. It was life-changing, life-giving. It was one of those THIS CHANGES EVERYTHING moments. This book was a great reminder of that initial excitement, the embrace of grace.

Lawrence's book is relevant; it is packed with truth that we all need to hear. Whether we've ever thought much about conversion or not. To the old, to the young, we could all use some truth.

© Becky Laney of Operation Actually Read Bible
Posted by Becky at 10:44 AM