Book Review: How To Read and Understand The Biblical Prophets 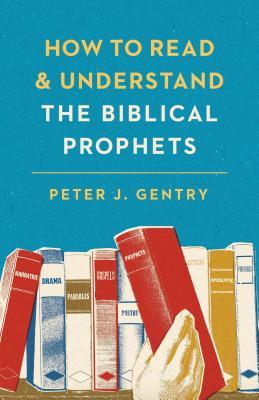 For anyone who has ever struggled to understand what they're reading as they read through the major or minor prophets of the Bible, I heartily recommend Peter J. Gentry's How To Read and Understand The Biblical Prophets. This book is not a commentary telling you what each book, each chapter, each verse means. Rather the book seeks to teach readers how to read and understand on their own. He teaches you guidelines and principles--giving readers the tools they need to do it themselves.


"Everything in the prophets is based upon the covenant made between God and Israel during the exodus from Egypt, especially the expression or form of the covenant as it is found in the book of Deuteronomy."


"For the prophets, their perspectives on social justice, their promises and their threats, even their very sentences and words, are all based upon the book of Deuteronomy, an expansion and renewal of the covenant made at Sinai."

One must not only understand the foundational importance of the covenant, of God's special relationship with the nation of Israel (and by Israel I mean Israel and Judah), of the blessings and curses associated with the covenant. But one must become acquainted with ancient, Eastern literature of that time.

For example, he writes:


"The normal pattern of Hebrew literature is to consider topics in a recursive manner, which means that a topic is progressively repeated. Using the recursive approach, a Hebrew author begins a discourse on a particular topic, develops it from a particular perspective, and then concludes his conversation. Then he begins another conversation, taking up the same topic again from a different point of view. When these two conversations or discourses on the same topic are heard in succession, they are like the left and right speakers of a stereo system. This pattern in Hebrew literature functions on both macro and micro levels. Individual sentences are placed back to back like left and right speakers. Paragraphs and even larger sections of texts are treated the same way."

He wisely points out and reminds us:


"For a hundred years or more, scholars have not asked, What were the Hebrews’ own principles and rules for telling stories? And how did the authors of that culture and time construct their works? The literary structure of each prophetic book as a whole is fundamental to interpretation."

The book he uses in most of his illustrations is my personal favorite--Isaiah. As he takes readers through the book, he discusses word pairs. I hadn't really studied word pairs or heard much about them before. So I found this section very informative.
He also addresses the question WHY did some prophets write down and record their prophecies (Isaiah, Jeremiah, Ezekiel, Daniel, etc.) and why some prophets didn't (Elijah, Elisha, Nathan, etc.) I had not thought about it in such a way before. But once I read this book, something clicked for me.


Apart from the prophetic word, imagine what the people of Jerusalem would have thought when the Babylonians came and conquered the city and razed it to the ground, exiling the citizens to Babylon. Imagine undertaking the journey on foot, in chains for weeks, perhaps months, and finally arriving in Babylon in a land far away from home. Imagine walking down a corridor of high walls, beautifully decorated, and arriving at the massive Ishtar Gate of the city of Babylon. Archaeologists have reconstructed this gate, and it is displayed in a museum in Berlin. Even today, simply viewing the reconstruction is an overwhelming experience. Were it not for the prophetic word, the people of Judah and Jerusalem would surely have concluded: “Now we know why the Babylonians conquered us. It is because the gods of Babylon are bigger and more powerful than Yahweh.” Such a conclusion, of course, would have been utterly wrong. They were conquered for only one reason: they had violated the covenant, and the covenant curses of Deuteronomy 28 had came upon them. God had promised that he would send enemies and kick them out of their land, and he had finally kept his word and done it. God brought the Assyrians and the Babylonians against his own people for violating the covenant. It was necessary, then, for the predictions of Isaiah, Jeremiah, and Ezekiel to be written down so that when those events occurred, the people of Israel would draw the right conclusions.

Also addressed within the book: TYPOLOGY. Now I'm more familiar with types and typology, so this wasn't all new to me. But he does a good job in the book explaining it. Primarily the focus is on the exodus and the new exodus.


A major type in the Bible, in both Old and New Testaments, is the exodus, when God delivered his people Israel from bondage and slavery in Egypt. Here an event in the past becomes a model or pattern to describe future deliverance and salvation for the people of God.

In brief, typology is governed by four factors. The first is correspondence between events, people, places, etc., Second is escalation from type to antitype so that the later event, person, or thing that can be said to be the fulfillment of the type is much better and greater than that which foreshadows it. Third is biblical warrant. For something to be considered a type, there must be exegetical evidence in the original text that indicates that what the text is dealing with is intended to be a model or pattern for something to follow in history. The fourth factor is that the progression of the covenants throughout the narrative plot structure of the Bible both creates, controls, and develops the typological structures across the canon of Scripture.


Apocalyptic is both a genre or kind of literature and a type of language that may be used in other genres that are not apocalyptic. Apocalyptic language uses complex and highly colored metaphors and symbols in order to describe one event in terms of another. In this way, an event can be described and, at the same time, the meaning of the event can be explained.

Overall, I found this book packed with helpful information.