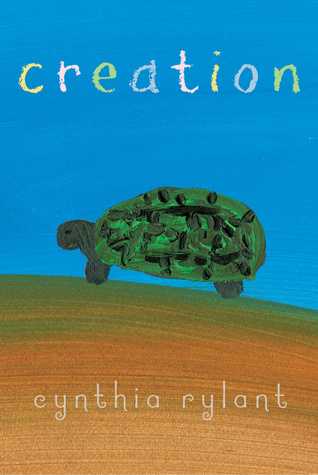 First sentence: In the beginning God created the heaven and the earth.

Premise/plot: Rylant gently adapts the KJV translation of Genesis 1 for her picture book, Creation. It is not a verse by verse adaptation. Rylant chooses which words and which verses to include in her adaptation.

She resumes her text with verse nine. She abbreviates verse eleven--mentioning grass and fruit but skipping over herbs. She eliminates verses twelve and thirteen. Which reads "and God saw that it was good. And the evening and the morning were the third day." Also she eliminates verses fourteen and fifteen: "And God said, Let there be lights in the firmament of the heaven to divide the day from the night; and let them be for signs, and for seasons, and for days, and years: And let them be for lights in the firmament of the heaven to give light upon the earth: and it was so."

She resumes her text with verse sixteen. But it isn't long before she's skipping again. "And let them be for lights in the firmament of the heaven to give light upon the earth: and it was so. And to rule over the day and over the night, and to divide the light from the darkness: and God saw that it was good. And God said, Let the waters bring forth abundantly the moving creature that hath life, and fowl that may fly above the earth in the open firmament of heaven." Genesis 1:18-20.

She does eliminate verse twenty-three: And the evening and the morning were the fifth day.

She almost combines Genesis 1:21 and 24, 25. Her text reads, "God created every living creature that moved: the beasts, the birds, and the creeping things. And it was good."

Here is where Rylant departs from Scripture--completely. Her text reads, "God then made man and woman and God said to them, Replenish the earth so that everything may multiply and be fruitful. He blessed them, these two who were most like him."

While Rylant has ignored--essentially--every numbered mention of days: first, second, third, fourth, fifth--she does mention the SIXTH day as being the day God finished his work of creation.

Her text ends with God taking a rest from his very good creation. She mentions the resting on the seventh day, but not the BLESSING of the seventh day. "And God blessed the seventh day, and sanctified it: because that in it he had rested from all his work which God created and made." Genesis 2:3.

My thoughts: I liked it. I really did. I think the illustrations are wonderful. The drama of the story unfolds well because of her illustrations. Is it the full story of creation? Not exactly. Did she leave out too much? Maybe. Maybe not.

I think if she had retold the story using her own words or mainly her own words, there wouldn't be as much of an issue of what she included and what she excluded. I have read dozens of creation stories within bible story book collections, they rarely include every single detail yet the excluded details didn't jump out at me as SUBTRACTIONS.

I really enjoyed this one. The illustrations make it worth sharing with little ones.

© Becky Laney of Operation Actually Read Bible
Posted by Becky at 6:30 AM