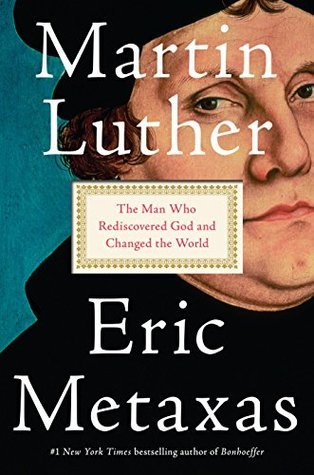 First sentence: There is no beginning to the story of Martin Luther.

I'll be honest. Concise isn't always better. There is such a thing as keeping Luther's life story so basic, so simple, so compact that it becomes dull, dry, BORING. The problem isn't that Luther led a dull life with hardly anything ever happening. Far from it! The problem is that putting Martin Luther into context--historically, spiritually, theologically--takes a lot of words and details. Rob a biography of good, substantive, meaty details, and it becomes dull. Metaxas' biography thrives on details. Readers need details--not just about Martin Luther himself--but about everything. Luther cannot be understood apart from his times, apart from his contemporaries, apart from his writings. Can Luther be understood fully? Can any man--or woman--be understood fully?! Any biographer who thinks they have grasped everything there is to grasp and know everything there is to know, and can explain the inner workings of Luther's heart and mind from birth to death aren't to be trusted. Luther is not simple. His biography shouldn't be simple either.

I would definitely recommend this one. I found it a compelling read, though not a quick one. The bad news: Metaxas' chapters are super-long. This almost forces you to slow down your reading--to take time with the text. That's also the good news. There is something to be said for going slow and steady through a book. Martin Luther is worth spending time with, worth engaging. And you just don't get that when you rush through a book.

In a world in which we nearly always associate the Bible with churches--and churches with the Bible--it is difficult to imagine a time when the two had almost no connection. That this changed so dramatically is yet another measure of Luther's immense impact on history. (52)

By the time Luther entered the monastic life, the one book that novices were allowed to read was in fact the Bible. We know that immediately upon entering the monastery, Luther was lent one that was bound in red leather, for he recollected this often in his later years. It seems that Luther did not receive the book lightly, for he not only read it but almost devoured it. (53)

Strangely enough, once a novice became a monk, he was no longer allowed to keep his Bible. At that point, he must limit himself to only reading scholarly books, and those while in his cell. It seems that only in Luther's private time in the library of the monastery did he have access to the Bible after his novitiate.

Staupitz saw that for Luther the Bible was not a book like Aristotle's Ethics or like a volume of Livy or Cicero. It was the living Word of God and therefore could not be read like any other book. It was inspired by God, and when one read it, one must do so in such a way--with such closeness and intimacy--that one fully intended to feel and smell the breezes of heaven. If one missed this aspect, one missed the whole point. For Staupitz, to read any other book like this was to be a fool, but to read the Bible in any other way than this was to be twice the fool. (68)

Therefore, one must not merely see what the devil could see, which is to say the words on a page, but see what only God could see and would reveal to those who desired it, which was in the words and around them too. (77)

The difference between Luther and many other Christians in this is that he is not afraid to make explicit what is clearly implicitly understood. The idea that all Bible verses are technically equal by dint of being part of the "Word of God" should not prohibit us from saying that some verses are more important than others. Some would say that we can somehow find the Gospel in every jot and tittle of Scripture, because it is alive and should not be read the way we read other books, but even if this is the case, we will look much harder in some verses than in others, where it is on the very surface for everyone to see. (293)

© Becky Laney of Operation Actually Read Bible
Posted by Becky at 10:15 AM