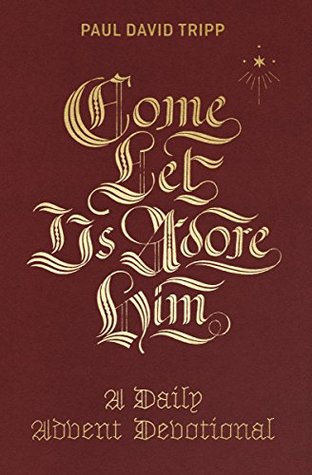 Are you taking the Christmas story for granted? Have you lost your wonder and awe? Do you remember why a Savior was needed in the first place? When was the last time you were humbled by the babe that was born to die...for you?

Come, Let Us Adore Him is a devotional written by Paul David Tripp. He seeks to wake up sleepy Christians and give a 'new' sense of wonder and awe.

Can a great book get its start as a tweet? I wouldn't have thought so...at all. But one December, Tripp decided to tweet each day about the Christmas story. He writes, "Each meditation begins with a tweet, which is then explained, defined, expanded, and applied in the meditation that follows. Following each meditation are Scriptures to use for further study. At the end of each meditation I present one central theme, one core truth from the narrative of Jesus’s birth for you to discuss with your children. Obviously, these meditations were written to adults, but they have nuggets of truth that every child could and should grasp."

I knew it was LOVE, LOVE, LOVE after reading just two or three entries. I love the directness. I loved that we get to the heart of the gospel in each and every entry. I love that he doesn't stay within the bounds of "the Christmas narratives." His entries are not limited to a few chapters of Matthew (1, 2), Luke (1, 2), and John (1). His entries are not limited to a few prophetic texts from the Old Testament (Isaiah, Micah, etc.) I love that his entries are not limited to revealing a sweet baby born in a manger. This isn't about a cozy peek at a loving, faithful couple caring for a newborn babe. It is about the good news and the bad news of the gospel. It is about the WHYS of the season. It is thought-provoking. But above all it is biblical. It is meaty--not a bit of fluff. If it is a gift--there are no wrappings, no bows, no tissue paper. Just a beautiful, beautiful Savior and King.

From the second entry:


Jesus knew he had come not just to preach the gospel of sacrifice, but also to be that sacrifice, yet he was perfectly willing.

Unwillingness is one of sin’s powerful damaging results.

It’s not just the Christmas story; rather, the entire redemptive story hinges on one thing—the eternal willingness of Jesus.

You see, the Advent story reminds us that our past, present, and future hope rest not on our willingness, but on the willingness of the One for whom the angels sang, the shepherds worshiped, and the magi searched. Willing Jesus is the only hope for unwilling sinners!

For parents and children: Central Theme: Willingness Talk to your children about what it means to be willing and how the sin in our hearts makes us unwilling. Encourage them to talk about places in their lives where they’re unwilling. Then talk about how Jesus came to earth and willingly did hard things because he loves us.