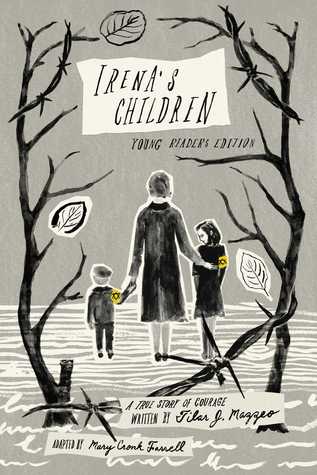 First sentence: In her native Poland, Irena Sendler is a famous heroine today.

Sendler was a Catholic who followed her conscience. She was in the right place at the right time to do something about the evil she saw. (I believe she was a social worker.) "When Irena thought of the risks she took going in and out of the ghetto, she decided she might as well go all out. She could only die once."(87)

My thoughts: Irena's Children is a fascinating, haunting book.  It is a difficult book to read, and a difficult book to review. How can you do justice to the subject matter?! The simple answer is you can't. The book describes horrible atrocities that happened on a daily basis. One sees humanity at its best and worst within the pages of this book.

I think NONFICTION is so important. While historical fiction can be gripping and compelling, nothing really can take the place of a well written biography or autobiography. (This one is a biography; Sendler died in 2008.)