Book Review: When Is It Right To Die 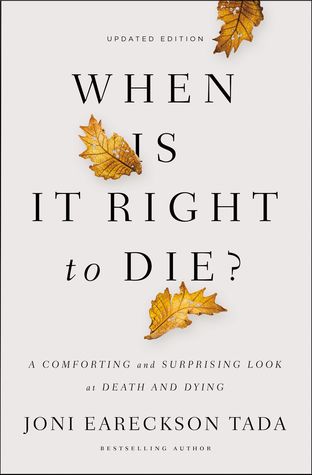 When Is It Right To Die? A Comforting and Surprising Look at Death and Dying. Joni Eareckson Tada. 1992/2018. Zondervan. 208 pages. [Source: Review copy]

From the preface: The last twenty-five years have brought a lot of change. When I first penned the words to When Is It Right to Die? much of what I discussed was theoretical. We had begun to see the first signs of the soul-chilling societal acceptance of physician-assisted suicide, but we had to travel abroad to find places where such acceptance of murder had become commonplace. Twenty-five years ago, my hope had been to provide a primer of sorts to readers whose only exposure to euthanasia was the occasional headline. But in the last twenty-five years, I’ve ached as I’ve seen more and more people stand behind the idea that a person has the “right to die.” And it gets worse. It is no longer a matter of merely “supporting” a person who has decided that his or her own life is not worth living. No, we are witnesses to more instances where the “right to die” has been given to a person with no say in the matter.

Joni Eareckson Tada's When Is It Right To Die is a must read in my opinion. Why? This book is literally a book about life and death, living and dying, right and wrong. It asks questions--tough questions--and provides some answers. But perhaps more importantly than providing all the answers, it shows readers how to go about finding the answers yourself--by digging deep into the word of God.

Another question asked is: Does having a "low quality" of life mean that life is no longer worth living?

The first part focuses mainly on current issues and culture. It is good. It is important. It is foundational. But the second and third parts are where the book enters greatness. The second part has some great spiritual gems. The third part is very practical.

Some of my favorite quotes from the second part:


Favorite quotes from the third part:


The book cover-to-cover is compelling and relevant. I highly recommend it.

© Becky Laney of Operation Actually Read Bible
Posted by Becky at 9:13 AM