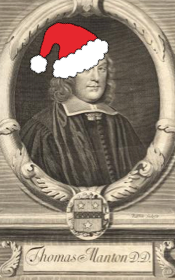 I will be continuing on in my study of Psalm 119 this autumn. I have spent months reading Thomas Manton's exposition of Psalm 119. In December, I hope to cover the next sixteen verses of Psalm 119.

49 Remember your word to your servant, for you have given me hope.
50 My comfort in my suffering is this: Your promise preserves my life.
51 The arrogant mock me unmercifully, but I do not turn from your law.
52 I remember, Lord, your ancient laws, and I find comfort in them.
53 Indignation grips me because of the wicked, who have forsaken your law.
54 Your decrees are the theme of my song wherever I lodge.
55 In the night, Lord, I remember your name, that I may keep your law.
56 This has been my practice: I obey your precepts.
57 You are my portion, Lord; I have promised to obey your words.
58 I have sought your face with all my heart; be gracious to me according to your promise.
59 I have considered my ways and have turned my steps to your statutes.
60 I will hasten and not delay to obey your commands.
61 Though the wicked bind me with ropes, I will not forget your law.
62 At midnight I rise to give you thanks for your righteous laws.
63 I am a friend to all who fear you, to all who follow your precepts.
64 The earth is filled with your love, Lord; teach me your decrees.

Labels: my autumn with Psalm 119, quotes, Thomas Manton, Worth Quoting