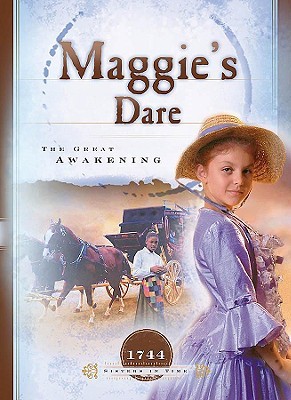 First sentence: Maggie Baldwin struggled to restrain the excitement bubbling up inside her. Her younger brother, Caleb, at ate eight, could run about the Souder shipyard with abandoned glee. But at age twelve, she was expected to use decorum befitting a lady.

Premise/plot: Maggie cares tremendously what other people think of her. Specifically she cares about what other girls her age--richer girls from prominent families--think of her. She's included, for the most part, but doesn't feel properly IN the in group. She wants to dress like them, talk like them, think like them, essentially be them. But now and then she realizes that she doesn't really think like them, that she's different. One way in which she differs from her friends is that she sees slavery as wrong. They don't. So when she sees her friend's new slave--her friend's first slave--becoming sicker and sicker, she tries to intervene to save her life. (Her father is a doctor. She has been raised to be compassionate--and observant.) Will Maggie learn to be true to herself no matter the risk to her popularity?

My thoughts: I'm not sure this is the best introduction to 'the Great Awakening.' I'm not even sure it's an adequate introduction to 'the Great Awakening.' What we do get is an outsider's perspective from a girl who does little thinking for herself for the first hundred pages. Because her friends look down upon the 'new' revivalist preachers, she does. She parrots whatever they have to say whenever the subject comes up. She ignores what other people have to say on the subject. Even if their experiences are more first-hand. The fact that she does eventually open up her mind--or perhaps I should say the Spirit awakens her mind--is good and nice. But I can't help wishing that Maggie had come to her senses quicker.

The book may or may not be set in 1744. The cover says 1744. But I could have sworn that some sentence in the book dates it in either 1740 or 1741. I can't find it now. But I remember reading it and it sticking out as odd. I want to say it was discussion about Christmas or the New Year.

I liked plenty of the characters in this one--just not Maggie, until the end.


© Becky Laney of Operation Actually Read Bible
Posted by Becky at 8:46 AM

Matthew 17
[15] Lord, have mercy on my son: for he is lunatick, and sore vexed: for ofttimes he falleth into the fire, and oft into the water.
[16] And I brought him to thy disciples, and they could not cure him.
[17] Then Jesus answered and said, O faithless and perverse generation, how long shall I be with you? how long shall I suffer you? bring him hither to me.
[18] And Jesus rebuked the devil; and he departed out of him: and the child was cured from that very hour.

Revelation 17
[15] And he saith unto me, The waters which thou sawest, where the whore sitteth, are peoples, and multitudes, and nations, and tongues.
[16] And the ten horns which thou sawest upon the beast, these shall hate the whore, and shall make her desolate and naked, and shall eat her flesh, and burn her with fire.