Book Review: Deliver Us From Evil 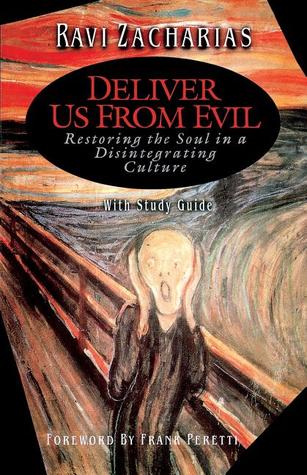 First sentence: If there is an image that mirrors the mind of the West today, it is strikingly reflected in Oscar Wilde's The Picture of Dorian Gray.

Deliver Us From Evil by Ravi Zacharias is in large part about the secular ideas that shape modern society and culture. What ideas shape the culture? Are worldviews being shaped--created--intentionally or unintentionally? Is it even possible to be objective? What biases shape us and shape others? In light of this secularization and privatization of society how should Christians live?

If the book urges anything--and it does--it is asking Christians to THINK, to be mindful, to be aware, to be awake. It is encouraging Christians to read and know the Word of God so that they have something to measure ideas by.Don't be so open-minded that you accept--shallow whole--any and everything you're told. In this world you will be surrounded by ideas by views that counter the truths of Scripture.  The Word of God is the truth by which we should see the world--the lens we use to judge ourselves and the world. It should impact how we think and how we live.

The book is divided into three parts: "The Moods of the Present," "The Voices of the Past," and "The Face of the Future."

The book was first published in 1996. In some ways--many ways--it is as relevant today as it was when it was published. However, some of the examples are slightly dated.

Overall, I found the book to be quite thought-provoking.


Behind an act is a thought or a belief, and those thoughts unleashed in anti-social behavior make the headlines. (xv)

The ideas we now popularly espouse are reshaping our culture, redefining our destiny, and are at the heart of the rampant evil that we now witness. (xv)

Truth is stranger than fiction, it is said, but as G.K. Chesterton has appropriately declared, that may well be because we have made fiction to suit ourselves. There is possibly a more disturbing reason for our estrangement from truth, particularly if that truth signifies a reality that is terrifying and unchangeable. Our inability to alter what is actual frustrates our grandiose delusions of being sovereign over everything. (13)

The greatest scrutiny must be paid to how and why we make our individual and societal decisions. (17)

The implications of our choices carry over into what we call lifestyles. Individually they may seem to be insignificant, but when the mind-set of a whole culture is altered in accordance with those choices, the ramifications are staggering. (17)

Secular belief grants itself privileges that it does not equally distribute. (59)

Shame is to the moral health of a society what pain is to the body. (64)

To raise a child without shame is to raise one with no immune system against evil. (66)

Actions, though sometimes impressive, can be premeditated and designed to deceive, but reactions come from the overflow of the heart and are impulsive. (76)

It has been correctly stated that religion is the essence of culture while culture is the dress of religion. (82)

The assumption that all ideas are equally true is false. (85)

Most people are guided in life by a handful of ideas, and therefore it is all the more important that there be a way of measuring why one idea is chosen over another. (85)

Life affords us the privilege of making connections and finding relationships, not only with people, but also with ideas. And sometimes the most exhilarating conversation takes place when one name or one event, shared between two individuals, unlocks a storehouse of memories and a wealth of emotions. (103)

The extent to which Christian conviction is muzzled reaches new and bizarre dimensions each succeeding year. (106)

Privatization insists that though one may choose to believe whatever one wants to it must be kept private...This allowance for private belief supposedly distinguished democracy from totalitarianism, where one's personal belief is dictated. But in effect the same public outcome results; life's deepest quests and most cherished values are sequestered. Every thinking person knows that to imprison a sacred belief within the private realm is ultimately to fracture, if not to kill, the belief. (106)

Does it make sense to entrust those who are immoral in private with the power to determine the nation's moral issues, and indeed, its destiny? One of the most dangerous and terrifying trends in America today is the disregard for character as a central necessity in a leader's credentials. The duplicitous soul of a leader can only make a nation more sophisticated in evil. (111)

In the fragile path of living, where relationships intersect and passions collide, God in His wisdom has provided fences, walls, and boundaries for our well-being, that we might not stray into terrain that destroys the very essence for which we were made. And it is these fences and walls that are coming down today with thundering force. (131)

What are we doing to our children when we tell them there are no moral boundaries? When we ridicule sacred things? When we leave them vulnerable to any philosophy of life that comes around? (143)

How a culture responds to the cross will determine its face for the future, for the cross alone can transform the heart. (187)


© Becky Laney of Operation Actually Read Bible
Posted by Becky at 11:55 AM