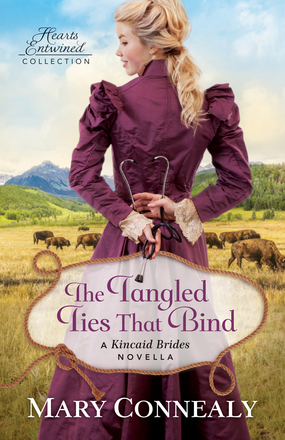 First sentence:
Rawhide, Colorado
June 20, 1883
Home. One more hour on the trail and Connor Kincaid would be home for the first time in five years.

Premise/plot: Connor and Maggie were best friends. But that was before--before he left for five whole years. In that time they've never been far from each other's thoughts. But he's never spoken--officially or unofficially--about what he's feeling and what his intentions are. Maggie has spent her time guessing and hoping. That is until she got tired of waiting. Why wait for a man who may or may not marry her if he ever comes around again? Better to spend her time getting an education--wouldn't it be something to train as a doctor?! Connor is shocked when he returns. Maggie is all grown-up and ready for marriage. But will she give up her education just because a man asks her to marry him? Will she put aside her dream of being a doctor and saving lives? NO! Will Connor be okay with the woman Maggie has become?

My thoughts: This one had potential certainly. But. It felt rushed and silly. The "rushed" feeling may come from this being part of a series. If Maggie and Connor have appeared in other books--either as major or minor characters--then that would explain a good deal of the disconnect. Readers are thrown into a story and perhaps expected to feel something towards the characters right away. You don't really get a sense of who they are as individuals before we're witness to a proposal. The "silly" feeling comes from how unrealistic it is overall. Connor follows her to the city where she's in school and an internship of sorts. He's hired by the doctor who's training or apprenticing her. And they seem to be doing the exact same tasks. Connor becomes an instant doctor with no training, no instruction, no schooling, no observing. How does a cowboy or ranch hand have this kind of practical working knowledge of medicine? The ending is both silly and rushed. Maggie's education is being paid for by a small town. They've drawn up a contract--they'll pay for her training and in return she'll practice medicine in their town for at least five years. Her fulfilling her contract would be mighty inconvenient...but how to get out of it?! The answer is stupid--in my opinion--but it does get her to the altar in time for her predictable happily ever after ending.


© Becky Laney of Operation Actually Read Bible
Posted by Becky at 11:44 AM