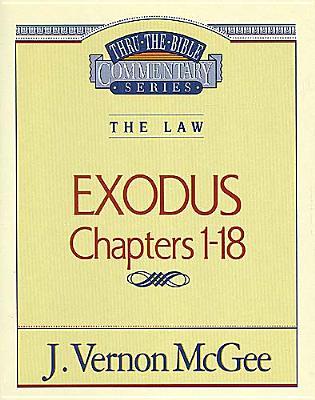 First sentence: The first few verses of Exodus connect it with the account of Genesis.

McGee's commentary reprints the text of the King James Version. These first eighteen chapters of Exodus are action-and-drama packed. They are weighty chapters as well. God appears to Moses in a burning bush. God begins to reveal himself to Moses as the great I AM. The God we meet in scripture is sovereign, almighty, compassionate. He has heard the cries of his people, and he is ready to act--ready to deliver. It is in the book of Exodus that Passover is introduced. This is incredibly weighty stuff that McGee is covering.

I loved reading this commentary. I disagreed a few times. (For example: "God says to us, “This is the salvation I offer you. Take it or leave it.” He wants us to take it but leaves the choice up to each individual." And, "If we place our faith in the work of Jesus Christ for us, we will be saved. God has a great plan of salvation but man must come to Him for it. He will redeem you with an outstretched arm.")  But overall, he had some great insights. In particular, I found his commentary on the plagues of Egypt and Passover to be insightful.