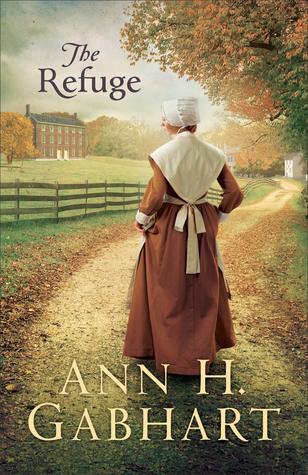 First sentence: You can't cheat death. We thought we could. At least we hoped we could. That was why I was in a blue Shaker dress, staring across a narrow table at Eldress Maria in her like garb as she told me about Walter.

Premise/plot: Walter and Darcie Goodwin joined the Shaker community hoping to escape a cholera outbreak. It was meant to be temporary. Neither Walter nor Darcie wanted to give up traditional marriage in favor of the Shaker lifestyle of celibacy. (As is evident by the fact that Darcie is with child when the novel opens.) But Walter is killed in an accident leaving Darcie little choice but to remain--again temporarily--with the Shakers. Darcie fears that she will be "trapped" there forever and ultimately lose her child. (Parents are not allowed to raise their own children. This is done communally.) Will she find a way out?

Flynn Keller is still mourning the loss of his wife. He struggles at times to take care of his young daughter, Leatrice. He has NO intentions of leaving his daughter with the Shakers permanently. Far from it. But he is seriously considering leaving her there for a few months so that she can attend their school. That would give him time to make some much needed repairs on his new home and make it fit for them both to live.

My thoughts: I enjoyed this one. The plot is much more complex than I shared in the above summary. (I didn't want to give too many details away after all.) I really liked getting to know the hero and heroine of this one. Their encounters with one another were necessarily brief and infrequent. In some ways, there isn't much "romance" to this one. It is a very good thing that I love historical fiction just as much as historical romance.

What I liked best about this one were the relationships between the women. Sister Darcie lives with the Shaker women for months--perhaps even a year or a little more. During this time she becomes close with several other women. Some of them have chosen the Shaker lifestyle wholeheartedly. Others are there because of limited options for women. I came to care for quite a few of these women and children.

A note on the cover...I do find it intriguing that the first sentence says the Shakers all dress in BLUE and there is a woman with a RED dress on the cover. But I didn't even notice this discrepancy until I'd finished the book and began writing my review.

© Becky Laney of Operation Actually Read Bible
Posted by Becky at 8:49 AM