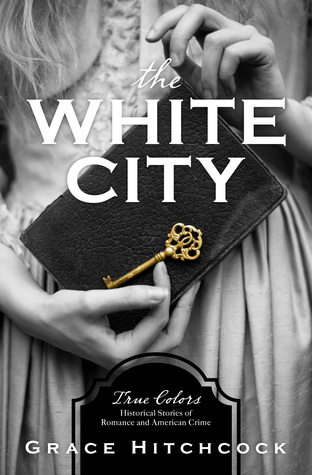 First sentence: Winnifred Wylde concentrated on his forehead, nodding, trying to respond appropriately, but it was so difficult with his nose hair escaping and retreating into his left nostril with every breath.

Premise/plot: The White City is a historical romance set in Chicago in 1893 during the World's Fair. The heroine, Winnifred, witnesses a crime while at the fair. Unfortunately her father--an inspector with the police--doesn't believe her. His daughter is fanciful, silly, prone to exaggeration. Her head is always in a book--gothic romances being her genre of choice. But he can't deny that women have gone missing. The fair may not be all that safe. He won't officially investigate the "crime" Winnie has witnessed. But he will assign an officer, Inspector Jude Thorpe, to act as bodyguard for his daughter. To follow her wherever she goes. To rescue her if she gets into trouble. Winnie can't say she loves the idea of being followed, but if you're going to be followed...it's not the worst thing in the world if he's GORGEOUS. The two become friendly--very friendly. She wants more--but does he?

Meanwhile, Winnie goes undercover as a SECRETARY for a suspicious man, H.H. Holmes who runs a hotel in Chicago. Inspector Thorpe will be within call if she beckons. But she's hoping that posing as a poor, friendless damsel, Cordelia Swan, that she can uncover some clues that will help the police get a warrant. Her father doesn't believe that his daughter witnessed him kidnapping a woman in a green dress. He doesn't see any harm in his daughter's undercover work. Not so long as she's under the watchful eye of one of his own men.

My thoughts: I enjoyed The White City. It is, I believe, the first in a new series of romance books focusing on American True Crime stories. It blends fiction and nonfiction with a touch of Christian romance. It was a quick, compelling read. Even though I knew that Holmes was the serial killer; I knew this from history. It is the 'true crime' element of the story. Perhaps not all readers will know this going in--but it's not a true spoiler, in my opinion. I really loved the romance elements of this one. I loved Jude Thorpe. I thought his character was very well done. I also liked the other love interest; though this was never a true love triangle. I would definitely recommend this one to readers who love a little mystery/suspense in their historical romances.


© Becky Laney of Operation Actually Read Bible
Posted by Becky at 7:57 AM