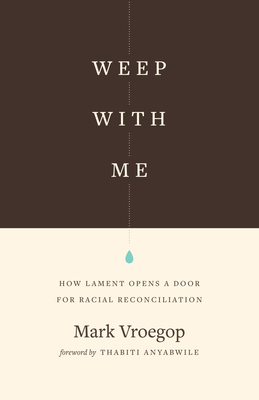 First sentence: There is no institution more equipped and capable of bringing transformation to the cause of reconciliation than the church.

To say that Weep With Me: How Lament Opens a Door for Racial Reconciliation is timely would be a bit of an understatement. This is Mark Vroegop's second book on lament and the church's need to lament. His first book, which I loved, loved, loved, loved is Dark Clouds Deep Mercy: Discovering The Grace of Lament.

In his second book, he urges readers that lament very well could be the common language that helps bring about the first steps of racial reconciliation. In addition to advocating for learning how to lament in general--both as hurting individuals and as a church body or community--he makes the case for racial reconciliation, and it's a good one: because it's biblical. The idea of different peoples, tongues, tribes, nations, clans, etc. coming together to WORSHIP the King of Kings and Lord of Lords. Believers find their reconciliation in Jesus Christ, and he has made us all one.

Vroegop does initially point out that the notion of race is not exactly biblical. God didn't create different races; he created just one, the human race. And that race was created in His Image and for His glory. But while he initially acknowledges that fact, Vroegop soon progresses to using terms and definitions as society does. Words are defined and explained. Race. Racism. Majority. Minority. Prejudice. He is engaging with a conversation with the world, with society, he talks using their terms.
To those who approach any and all books about race with their defense at high alert, this might be alarming and unsettling.

I would encourage you to read this one cover to cover even if you have hesitations here and there. Because even if you don't end up agreeing with him 100% of the time, he offers plenty to think about.

Since not everyone will have read the first book on how to lament and why it's so important to our emotional, mental, and spiritual health to know how to lament, he offers plenty of refreshers on the hows and the whys.

The book is divided into three parts. "In part 1 we’ll start with a basic definition of terms and learn what the biblical language of lament involves. Then we’ll discover the value of spirituals, a musical expression of lament in American culture. And I’ll also show you why I think lament opens a door for reconciliation. Parts 2 and 3 focus on the application of lament. In part 2 we’ll learn how lament can help white Christians weep, speak, and repent where needed. In part 3 we’ll explore lament for African American and other minority believers as they wrestle with exile, redeem their hurt, and dare to hope again. Finally, we’ll conclude by looking at the implications of what we’ve learned together."

Each chapter ends with a lament prayer contributed by a pastor or teacher. (As well as some discussion questions.)

His goal is to see a diverse set of believers worshiping side by side every Sunday on this side of eternity.


Prayers in pain lead to trust—together.

Christianity looks stunning to the world and most emulates Jesus when our identity and unity in the gospel are more foundational than any other identity—including our ethnicity.

When Christians from majority and minority cultures learn to grieve together, they reaffirm their common bond as brothers and sisters in Christ. Lament enters into the deep emotions of sorrow, hurt, misunderstanding, and injustice.

Lament starts with a humble posture. It communicates: “I’m here. I’m sad too. Let’s talk to Jesus, because we need his help.”

Simply stated, a lament is a prayer in pain that leads to trust. Laments are more than merely the expression of sorrow. The goal of a lament is to recommit oneself to hoping in God, believing his promises, and a godly response to pain, suffering, and injustice. Lament is the historic biblical prayer language of Christians in pain. It’s the voice of God’s people while living in a broken world. Laments acknowledge the reality of pain while trusting in God’s promises.

Godly lamenters keep asking even when the answer is delayed.

Laments help us through suffering by directing our hearts to make the choice—often daily—to trust in God’s purposes hidden behind the pain. In this way, a lament is one of the most theologically informed practices of the Christian life. Laments lead us through our sorrows so that we can trust God and praise him.

Lament creates a language to “weep with those who weep.” It helps us express sorrow with one another. Lament gives us a voice of empathy. It communicates that while we may not understand, we are willing to walk alongside a brother or sister in pain.

The Bible calls us to weep with those who weep; it doesn’t tell us to judge whether they should be weeping. H. B. Charles Jr.

We empathize not because we fully understand but because we have been freely loved by Christ. Entering the pain of another and lamenting with others demonstrates the heart of Christianity.

Lament candidly identifies the brokenness around us and in us. It acknowledges the gap between God’s design for the world and our experience. Lament is the way the Bible talks about life in a sinful world.

Even while the facts are unclear and emotions run high, lamenting the presence of racial tension is better than silence. We can acknowledge the hurt our minority brothers and sisters feel. Lament refuses to allow silence to rule our lives.


© Becky Laney of Operation Actually Read Bible
Posted by Becky at 10:32 AM