30. The Knowledge of the Holy 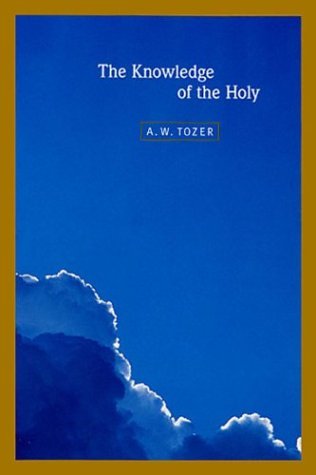 The Knowledge of the Holy. A.W. Tozer. 1961/1978. HarperCollins. 128 pages. [Source: Book I Bought]
First sentence from chapter one: What comes into our minds when we think about God is the most important thing about us. The history of mankind will probably show that no people has ever risen above its religion, and man’s spiritual history will positively demonstrate that no religion has ever been greater than its idea of God. Worship is pure or base as the worshiper entertains high or low thoughts of God. For this reason the gravest question before the Church is always God Himself, and the most portentous fact about any man is not what he at a given time may say or do, but what he in his deep heart conceives God to be like. We tend by a secret law of the soul to move toward our mental image of God. This is true not only of the individual Christian, but of the company of Christians that composes the Church. Always the most revealing thing about the Church is her idea of God, justas her most significant message is what she says about Him or leaves unsaid, for her silence is often more eloquent than her speech. She can never escape the self-disclosure of her witness concerning God.
I have read A.W. Tozer's Knowledge of the Holy five times now, I believe. I reviewed it in 2012, 2014, 2017, 2021 and 2022. It is one of my all-time favorite books to read and reread. Every time I reread this one different passages leap out at me being super relevant.
Can a book be both theological and devotional? It's a tricky combination to pull off, I think. But A.W. Tozer's classic Knowledge of the Holy is one of the best examples I've ever read. It is both theological--of substance and depth--and devotional--written with the pure intent to make your heart love and love greatly your Lord and Savior. Why learn more about God? So you can love him more, so you can worship him in spirit and truth. Tozer is urging readers to meditate on God, to meditate on God's glory--his majesty. He's saying DELIGHT IN GOD.
It is a short book that I'd recommend to just about anyone. It is a book EVERY Christian needs to consider picking up. Even if you're not typically a reader of theology.
Knowledge of the Holy is very reader-friendly. Each chapter is short--just three or four pages, which is why I think it would be a great choice for a devotional. The content has weight to it--it is a book ABOUT God how could it be anything else? Yet. At the same time, it is written in a style that is simple and straight-forward.
Why read A.W. Tozer's The Knowledge of the Holy?Because…"It is impossible to keep our moral practices sound and our inward attitudes right while our idea of God is erroneous or inadequate. If we would bring back spiritual power to our lives, we must begin to think of God more nearly as He is."Because…"What comes into our minds when we think about God is the most important thing about us."Because…"Wrong ideas about God are not only the fountain from which the polluted waters of idolatry flow; they are themselves idolatrous. The idolater simply imagines things about God and acts as if they were true."Because... "If we insist upon trying to imagine Him, we end with an idol, made not with hands but with thoughts; and an idol of the mind is as offensive to God as an idol of the hand."Because…"We can never know who or what we are till we know at least something of what God is."Because…"It is not a cheerful thought that millions of us who live in a land of Bibles, who belong to churches and labor to promote the Christian religion, may yet pass our whole life on this earth without once having thought or tried to think seriously about the being of God."Technically, all those reasons are reasons to read the Good Book, the Word of God, Holy Scriptures. But I think the Holy Spirit can and will use Tozer's words--long after he's dead--to inspire new generations to seek God.
Favorite quotes:

It is impossible to keep our moral practices sound and our inward attitudes right while our idea of God is erroneous or inadequate. If we would bring back spiritual power to our lives, we must begin to think of God more nearly as He is.

Always the most revealing thing about the Church is her idea of God, just as her most significant message is what she says about Him or leaves unsaid, for her silence is often more eloquent than her speech. She can never escape the self-disclosure of her witness concerning God.

That our idea of God correspond as nearly as possible to the true being of God is of immense importance to us. Compared with our actual thoughts about Him, our creedal statements are of little consequence. Our real idea of God may lie buried under the rubbish of conventional religious notions and may require an intelligent and vigorous search before it is finally unearthed and exposed for what it is. Only after an ordeal of painful self-probing are we likely to discover what we actually believe about God.

Low views of God destroy the gospel for all who hold them.

The idolatrous heart assumes that God is other than He is - in itself a monstrous sin - and substitutes for the true God one made after its own likeness. Always this God will conform to the image of the one who created it and will be base or pure, cruel or kind, according to the moral state of the mind from which it emerges.

A god begotten in the shadows of a fallen heart will quite naturally be no true likeness of the true God.

The essence of idolatry is the entertainment of thoughts about God that are unworthy of Him. It begins in the mind and may be present where no overt act of worship has taken place.

The idolater simply imagines things about God and acts as if they were true.

If we insist upon trying to imagine Him, we end with an idol, made not with hands but with thoughts; and an idol of the mind is as offensive to God as an idol of the hand.

The study of the attributes of God, far from being dull and heavy, may for the enlightened Christian be a sweet and absorbing spiritual exercise. To the soul that is athirst for God, nothing could be more delightful.

An attribute of God is whatever God has in any way revealed as being true of Himself.

An attribute, as we can know it, is a mental concept, an intellectual response to God's self-revelation. It is an answer to a question, the reply God makes to our interrogation concerning himself.

The doctrine of the divine unity means not only that there is but one God; it means also that God is simple, uncomplex, one with Himself. He need not suspend one to exercise another, for in Him all His attributes are one. All of God does all that God does; He does not divide himself to perform a work, but works in the total unity of His being.

The divine attributes are what we know to be true of God. He does not possess them as qualities; they are how God is as He reveals Himself to His creatures. Love, for instance, is not something God has and which may grow or diminish or cease to be. His love is the way God is, and when He loves He is simply being Himself.

To meditate on the three Persons of the Godhead is to walk in thought through the garden eastward in Eden and to tread on holy ground.

Because we are the handiwork of God, it follows that all our problems and their solutions are theological.

The fact of God is necessary to the fact of man. Think God away and man has no ground of existence.

Sin has many manifestations but its essence is one. A moral being, created to worship before the throne of God, sits on the throne of his own selfhood and from that elevated position declares, "I AM." That is sin in its concentrated essence; yet because it is natural it appears to be good. It is only when in the gospel the soul is brought before the face of the Most Holy One without the protective shield of ignorance that the frightful moral incongruity is brought home to the conscience. In the language of evangelism the man who is thus confronted by the fiery presence of Almighty God is said to be under conviction.

The Christian religion has to do with God and man, but its focal point is God, not man. Man's only claim to importance is that he was created in the divine image; in himself he is nothing.

Unbelief is actually perverted faith, for it puts its trust not in the living God but in dying men.

For every man it must be Christ or eternal tragedy.

Abounding sin is the terror of the world, but abounding grace is the hope of mankind.

The Christian witness through the centuries has been that "God so loved the world . . ."; it remains for us to see that love in the light of God's infinitude. His love is measureless. It is more: it is boundless. It has no bounds because it is not a thing but a facet of the essential nature of God. His love is something He is, and because He is infinite that love can enfold the whole created world in itself and have room for ten thousand times ten thousand worlds beside.

God cannot change for the better. Since He is perfectly holy, He has never been less holy than He is now and can never be holier than He is and has always been. Neither can God change for the worse. Any deterioration within the unspeakably holy nature of God is impossible. Indeed I believe it impossible even to think of such a thing, for the moment we attempt to do so, the object about which we are thinking is no longer God but something else and someone less than He.

In God no change is possible; in men change is impossible to escape.

God will not compromise and He need not be coaxed. He cannot be persuaded to alter His Word nor talked into answering selfish prayer. In all our efforts to find God, to please Him, to commune with Him, we should remember that all change must be on our part. "I am the Lord, I change not."

We can hold a correct view of truth only by daring to believe everything God has said about Himself.

We do God more honor by believing what He has said about Himself and having the courage to come boldly to the throne of grace than by hiding in self-conscious humility among the trees of the garden.

© Becky Laney of Operation Actually Read Bible
Posted by Becky at 11:09 AM