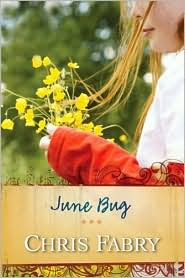 Fabry, Chris. 2009. June Bug. Tyndale. 326 pages.
Some people know every little thing about themselves, like how much they weighed when they were born and how long they were from head to toe and which hospital their mama gave birth to them in and stuff like that. I've heard that some people even have a black footprint on a pink sheet of paper they keep in a baby box. The only box I have is a small suitcase that snaps shut where I keep my underwear in so only I can see it.
June Bug, our nine-year-old heroine, lives with her dad in an RV. They travel the country together year-round. Never settling down into any one place. When the novel first opens, the pair happens to be stuck in a Walmart parking lot in Colorado. He's been waiting for a part to come in for several weeks at least. Sheila, one of the Walmart employees, notices June Bug wandering the aisles of the store day after day. Notices how she looks at the other children--the other girls--as they shop. Having a big heart, she offers them both a place to stay. The RV is towed to her land, her home. And while the dad, Johnson, stays in the RV, this is the first time--at least the first time that she can remember--where June Bug sleeps in a real bed with a good mattress. During these few weeks, she learns to ride a bike, gets a nice doll of her own, and is just thrilled that Sheila's neighbor has horses and is willing to let her ride. Sheila's convinced that June Bug would be happier if her father would settle down, would give her a "normal" home, a chance to go to school, a chance to make friends, etc.
Natalie Anne Edwards has been missing since she was two. Her grandmother is convinced the little girl is still alive. She still prays for her safe return. Her grandfather and her mother are less convinced. Especially the mother. When a new clue comes to light, the police begin to refocus their attention to the case--as does the news.
How do these two stories connect...read for yourself in this modern retelling of Les Miserables.
What did I think of this one? I liked it for the most part. In a way, I wish more of the story could have been told through June Bug's perspective. We have a little bit of her story as seen through her own eyes. But the narrative shifts throughout the book to many different characters. What I did like was that most--if not all--of the characters we get to meet have some substance.
© Becky Laney of Operation Actually Read Bible
Posted by Becky at 11:08 AM