This week, My Friend Amy, asks:

I think there are various categories: the good, the bad, the ugly. I think sometimes the bad and ugly are more memorable to the reader. Who can really forget Mr. Collins or Mr. Slope? Would I want to listen to Mr. Collins or Mr. Slope week after week? Would I want to have to be in church meetings with them on Sunday afternoons? No. And no! For the record, Mr. Collins is found in Pride and Prejudice by Jane Austen; Mr. Slope is found in Barchester Towers by Anthony Trollope. Both books are ones I'd recommend. And if you've got a phobia of reading classics, there are GREAT movies of both of these. 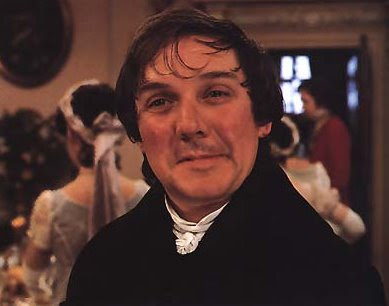 As far as Christian fiction, I think the vicar in Lawana Blackwell's Gresham Chronicles was a nice portrayal. He wasn't perfect--he had flaws--but it was those flaws and the lack of self-righteousness that made him a good character. He definitely wasn't stereotypically wise and all-knowing. (Book one is The Widow of Larkspur Inn and book two is The Courtship of the Vicar's Daughter. There are others in the series. But I haven't read them yet.)
The problem I have with portrayals of Christianity--of pastors--in mainstream, contemporary fiction is that they often miss the mark completely. Sometimes the theology is just out-and-out wrong. Offensively and abrasively wrong.
One of the fictional characters that I think most people would love to see die a horrible, terrible death is the pastor in Life As We Knew It by Susan Beth Pfeffer.
© Becky Laney of Operation Actually Read Bible
Posted by Becky at 9:38 PM

I found Jan Karon's Father Tim in the Mitford series very likeable. He has his flaws, but the townspeople love him. He has a realness to him.