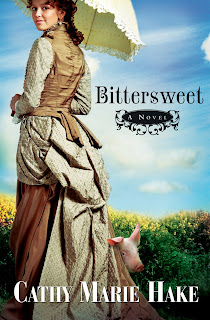 Bittersweet by Cathy Marie Hake, 2007.
Bittersweet is the sequel to Letter Perfect. While Letter Perfect was narrated by Ruth, Bittersweet is narrated by several characters including: Laney (Josh's sister and Ruth's sister-in-law), Galen Sullivan (Josh's best friend, Laney's long-time crush), and a new character named Ivy. I don't know if it was the change of narrators, or if my dark cloud has lifted, or if I've just grown used to her writing style, but I really enjoyed Bittersweet. Enjoyed perhaps isn't strong enough of a word. I loved this book.
A year has passed since Letter Perfect ended. It is the fall of 1860. The book opens with Laney and Ruth (not to mention the unforgettable Hilda) at the Fair (I'm assuming a state fair) along with some of the Sullivan family. Galen has remained at home to take care of the farm and tend the horses since he is in charge of one of the pony express stations. (I don't know if station is the right word since my knowledge of the pony express is severely limited.) And the time away from his family has shown him several things: he doesn't know anything at all about cooking OR cleaning. He is surviving on the kindess of strangers--okay, they're not really strangers, they're just neighbors who know that a bachelor would need some care and attention while his mama is away. The other thing that he learns is that there is a family (father, son, daughter) squatting on his land. He is not overly thrilled to find them. He wants them gone. He doesn't trust them. But finally, he relents to the man's pleas and allows them to stay if and only if he agrees for his son (I'm assuming 19 or 20ish) to work for him several days a week. Ishmael is the son's name. Ivy is the daughter. Ivy makes a good substitute cook and housekeeper while his mom is away at the fair. Not that she stays at the house--that would be improper--but she does cook a few meals for him and cleans up the mess he's made of the house.
The book is about what happens when everyone returns. Ivy and Ishmael are now "working" for the Sullivan family. Mrs. Sullivan has mercy on the family and sees how they are on the verge of starvation. So she 'hires' Ivy to help her cook and sew and do other household chores in exchange for food for her family. Ishmael, Galen discovers, is also a hardworker. But both Ivy and Ishmael lack polite manners. They've never been taught how to interact and behave around others. They don't know which subjects are taboo. Galen encourages Laney and Ruth to be patient and to try to teach Ivy some of the things she needs to know. A task that proves more challenging than anyone can imagine.
Galen begins watching Laney. Watching how Laney acts with Ivy. Noticing how kind she is. How patient. How forgiving. And he notices just how beautiful his best friend's little sister has become. He is madly in love with her. And he declares his intentions to Josh. But just as he begins to court the woman of his dreams, the unexpected happens.
Life isn't always easy. It isn't always sweet. Sometimes there is pain and confusion. Sometimes there is heartache. Sometimes there is anger. Sometimes life can make you bitter. As the McCain and Sullivan families learn, you may not have control over what happens to you in life...but you can learn to control how you react to life's unexpected turns.
http://www.cathymariehake.com/
© Becky Laney of Operation Actually Read Bible
Posted by Becky at 3:42 PM