Book Review: North! Or Be Eaten 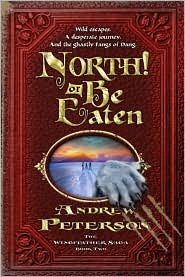 "Toooothy cow!" bellowed Podo as he whacked a stick against the nearest glipwood tree. The old pirate's eyes blazed, and he stood at the base of the tree like a ship's captain at the mast. "Toothy cow! Quick! Into the tree house!"

North! Or Be Eaten is the sequel to On the Edge of the Dark Sea of Darkness, the second in the Wingfeather Saga by Andrew Peterson. It stars the Igiby children: Janner, Tink, and Leeli. And the adults that love them--their grandfather, Podo, their uncle-friend, Artham (a.k.a. Peet the Sock Man), their mother, Nia, and their bookseller-friend, Oskar N. Reteep. Of course, there are enemies to be found as well. The danger has tripled or even quadrupled in this latest installment: there are the Fangs of Dang, the monsters of Glipwood Forest, the thieving Stranders of the East Bend, and the merciless folks at the 'dreaded' Fork Factory.
If you're a reader of fantasy and like action, adventure, mystery, suspense, and some humor...then this one might suit you well. Though I would definitely recommend starting with the first book. It does require you to suspend your disbelief and engage your imagination. Peterson has created a whole new world--filled it with people and various creatures--including dragons and monsters--and tried to give it a culture all its own.
I can understand and appreciate the family dynamics and relationships. The Wingfeathers (aka, the Igibys) are a complex bunch no question. And our hero, Janner, is well-developed. It's hard not to love such a hero. But it's harder for me to believe, to accept, some of the fantasy elements of this world--the wild creatures, etc. I think this comes easier for some readers than for others. So on the one hand, I cared about these characters and I chose to keep reading because I had to know what happened to them, but I didn't necessarily love the fantasy bits. As an adult, it's really hard to judge at times how well a book is going to work for its intended audience.
© Becky Laney of Operation Actually Read Bible
Posted by Becky at 12:29 PM