Book Review: Lady in the Mist 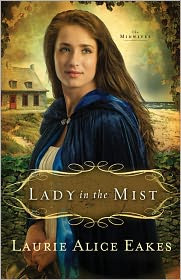 "I'm sorry." Tabitha Eckles dared not look Harlan Wilkins in the eye. If she witnessed even a flicker of grief, the floodgates of her own tears would spring open and drown her good sense in a moment when she needed all of it. "I did everything I could to save your wife."

Our heroine, Tabitha, is a midwife, an unmarried midwife. Our novel is set in 1809 as tensions between England and the United States are growing. Her work takes her out all hours of the day and night. And, for some in town, she poses a risk. Because she might just witness something that she's not supposed to. For strange things have been happening in town in recent months. Men have been disappearing. Men forced to join the British navy against their will. There are definitely men who pose a danger for our young heroine. But not all the dangers are obvious.

There are two men in Tabitha's life. One is her former fiance, Raleigh. He left her at the altar and broke her heart. He may be back in town. He may be wanting to speak gently, tenderly, wanting to make amends. But just because he's ready, doesn't mean she is. For his leaving was just one of the many tragedies in recent years which made her stop believing in God--others being the death of several family members. The second man is an indentured servant named Dominick. He seems dangerous. She first sees him at night--or early morning--a time when he should definitely not be out of the house. The fact that he's British and wandering around on the beach. Well, it's odd. But not wanting him to be punished, not having any real proof that he's done anything wrong, she holds her tongue. There is something about him that intrigues her. And they continue to meet as the weeks go by. One man is more than he seems...

I enjoyed this one. I am not sure I LOVED it. But I really enjoyed it. I found it a satisfying read.

thanks for the review, Becky, I really want to read this book.