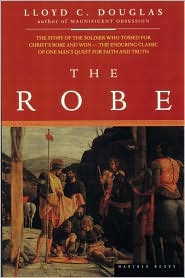 Because she was only fifteen and busy with her growing up, Lucia's periods of reflection were brief and infrequent; but this morning she felt weighted with responsibility.

The Robe concerns two men--one a master, a Roman Tribune, and one a slave. Both men are on the search for the truth about a certain Galilean, Jesus. Marcellus, a soldier, was there at the Crucifixion. In fact, he was the one who 'won' the seamless robe. But the robe, at first, acts as a negative force--a reminder of the worst day and night of his life. It reminds him of his guilt--though he hadn't been in Jerusalem many days--he was just there for the Passover--he knew the man to be innocent of the charges brought against him. Demetrius, his slave, views the robe quite differently. For him, it's a positive force. He gets this peaceful, warm-and-fuzzy feeling when he touches it. Though ordered to destroy the robe, he refuses. For he feels that the robe could heal his master's insanity. He takes the robe with him on their trip to Athens. For Marcellus needs time for his mind to heal from the horrors of what he's seen. While there, he meets a Samaritan man who agrees to mend the robe. Slowly but surely both men befriend this man who teaches them Aramaic. For both men feel drawn to return, to learn more about this man Jesus, to talk to the men and women who followed him. By this time, Marcellus has been "healed" by the robe of his mental distress, his anguish. What will they discover on their journey? What will they learn by talking to these witnesses? What will they learn of Jesus' teachings? his miracles? Will either man believe? And if they do believe, will they be faithful witnesses for Christ? Will they spread the good news, the gospel? Will they be willing to die for their Lord and Savior?

The Robe is an interesting novel. There were sections I found completely compelling. There were sections I grew frustrated. I felt an almost immediate connection with Demetrius. I followed his journey--his physical and spiritual journey with great interest. It was easy to love him. But Marcellus, well, I felt differently towards him. His skepticism annoyed me at times. The way he tried to reason away the supernatural, the miraculous elements of Jesus' ministry. Jesus turning water into wine. Jesus feeding five thousand. Jesus healing the blind, deaf, and lame. Jesus calming the storm. His journey is much slower than Demetrius' journey. And the men and women whom Marcellus speaks with are slow in revealing the gospel, the truth. They just give a few details at a time, a few stories at a time. And they take FOREVER AND A DAY to get to the resurrection. They're worried, of course, that Marcellus won't believe. That Marcellus being a Roman soldier could prove dangerous. And that perhaps it would be better to keep the truth from him. To keep him in the dark. But that frustrates me as well! For the power of the gospel is in the resurrection. There is no gospel without the resurrection. When I read Acts, what is proclaimed first and foremost? The fact that Jesus died and rose again! The early preachers--including the remaining disciples--did not hide the resurrection from their audience worried that revealing this would keep the numbers of followers down. They weren't afraid of being thought foolish by unbelievers. They didn't hide the mysteriousness of the faith. They proclaimed it. They celebrated it.

Another thing that irritated me was Marcellus being fixated on the "good teachings" of Jesus without wanting the miraculous, the divine. Marcellus was wanting to establish a kingdom based on Jesus' teaching without accepting Jesus' divinity.

The good news is that although it took a little over three hundred pages for poor Marcellus to come to faith, he does come to faith. And oh the change it makes in him, oh the transformation Christ brings to his life! Once Marcellus believes that Jesus is the Son of God, once Marcellus believes in the resurrection and the second coming, then things start to happen! Marcellus will definitely have an opportunity to spread the gospel with others--beginning with the emperor himself. Marcellus is also hoping that his fiancee, Diana, will believe.

I found the novel interesting, and I liked it. But I'm not sure it was love.