Book Review: The Legacy of the King James Bible 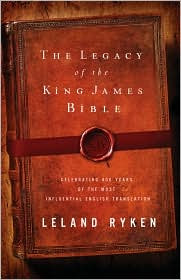 The Legacy of the King James Bible: Celebrating 400 Years of the Most Influential English Translation. Leland Ryken. 2011. Crossway. 272 pages.

What is the actual origin of the King James Bible?


THE KING JAMES BIBLE IN ITS OWN DAY. This first section held the most interest for me. Though to be honest, I have an interest in early translations of the Bible. I have read the Wycliffe New Testament. I have read the Tyndale New Testament. I have plans to read the Geneva Bible (1599 edition). So I appreciated the fact that Ryken spent a few chapters discussing these early translations of the Bible, discussing how these translations influenced one another, the circumstances of their publication, their strengths and weaknesses.

THE KING JAMES BIBLE IN HISTORY. I was most interested on "The Influence of the King James Bible on the History of Bible Translation." I'll confess again, I'm one of those that actually read the translators' notes and prefaces at the beginning of the bible. In fact, that's one of the first things I do when I buy a bible. I read the introductions and prefaces to the bible translation and to that specific bible. Still, I think it's fascinating to discuss the different philosophies behind translation. (Word-for-word versus thought-for-thought. OR "Essentially Literal Translation" versus "Dynamic Equivalence.") It highlights some translations over others as being in the tradition of the King James Version. (RSV, NKJV, NASB, ESV)

THE KING JAMES BIBLE AS A LITERARY MASTERPIECE. "It is literary when it preserves the literary qualities of the Bible in its original Hebrew and Greek form." (121). This section requires effort, but, for the most part, the effort is worth it. I think it is important to consider the genres of the Bible. I think it is important to recognize that some translators do a better job than others--at maintaining the beautiful, complex simplicity of the Bible. But this section isn't without its difficulties--its flaws. The vocabulary is, well, difficult especially in the poetry section. And are readers really willing to use a dictionary several times per page?! (To save you the trouble, lapidary is an adjective that can be defined as "having the elegance and precision associated with inscriptions on monumental stone".) The last chapter in this section, I found practically irrelevant. Unless the reader is obsessed with "The Literary Establishment" and is intimately acquainted with all its members, this name-dropping session may leave readers with a so what? Will knowing what T.S. Eliot thought of the King James Bible change my life in any way? Will it change how I feel about the Bible? Will it change the way I read the Bible? Will my faith be strengthened?

THE LITERARY INFLUENCE OF THE KING JAMES BIBLE. Personally, I found this section the weakest in terms of relevance to readers. More name-dropping. If you have a degree in English literature, you will probably recognize some of the authors mentioned: John Milton, George Herbert, John Bunyan, John Dryden, Alexander Pope, Jonathan Swift, Samuel Johnson, William Blake, William Wordsworth, Samuel Taylor Coleridge, Nathaniel Hawthorne, Herman Melville, Alfred Lord Tennyson, Thomas Hardy, Virginia Woolf, James Joyce, Ernest Hemingway, John Steinbeck, T.S. Eliot, etc. Some of these authors were believers--of some variety or another--but not all of them. He includes plenty of unbelievers in these chapters too. Again the focus isn't on the Bible--in terms of it being the word of God, in terms of it being gospel-truth, it is on the Bible as literature. Is this information interesting? Perhaps in small doses.
I *did* find the Steinbeck section interesting.

THE AFTERWORD. I did NOT like this afterword. His argument is perhaps worded too strongly, and his argument isn't well-supported. He essentially blames all the world's woes on the fact that the KJV is no longer the "common English Bible in both the church and culture at large." He writes, "it is a fact that the English Bible is no longer accepted as an authoritative book in the public spheres that I have explored in this book--religion, education, law, politics, and the arts" (230). He also connects biblical illiteracy--both in and out of church circles--with the introduction of other Bible translations. He goes so far as to say, "The very proliferation of translations has discouraged the Christian public from seeking to know what the Bible actually says" (230). I think it is one thing to argue that the KJV is a "better" translation than more modern translations (The Message, New Living, New International Version, etc.), it is quite another to take his argument as far as he does. He oversimplifies for one thing, and glamorizes "the good old days." My problem? He doesn't show cause and effect. He doesn't really try to connect the dots in his arguments. The authority of the Bible, for example, has been "attacked" for centuries--questioned for many generations. I'd definitely trace that back to the nineteenth century, at least, with the school of higher criticism and the search for a historical Jesus. He doesn't even mention the political and legal aspects of separation of church and state. Couldn't that have something to do with the Bible not being accepted as an "authoritative" book in public spheres? And since the "cultural" influence on education in previous centuries often included passages of the Bible directly into text books, then it only makes sense that God's removal from public schools would lead to this decline. And this "cultural Christianity" is something that I have issue with. Is "cultural Christianity" beneficial in an eternal way? If a person's faith is sincere, if it goes beyond the surface, beyond generic identification as "Christian," then it's real, it's lasting. It isn't something that can be diminished by a new translation. Perhaps, cultural Christianity has its roots in actual believers. But that doesn't mean the next generation and the next generation and the next generation would necessarily be true believers and followers. Faith has to be personal. It's not something that your parents, grandparents, and culture can give you. Biblical illiteracy. Is it a problem? Yes! But not because of different Bible translations! The reason people are biblically illiterate? They are too lazy, too unwilling to make God a priority, too willing to make a thousand excuses as to why it's impossible for them to read the Bible, and they're definitely too in love with the world. They'd rather be doing anything else with their time. If you want to read more about this, I'd recommend Taking Back The Good Book by Woodrow Kroll. 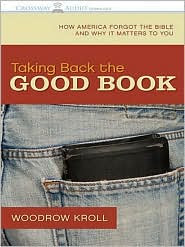 All of these quotes are from Taking Back The Good Book--also published by Crossway.

A huge disconnect exists between owning a Bible and reading it. Simply put, the number of people who claim to read the Bible isn't supported by their knowledge of the Bible (66).

Some people choose not to read the Bible because they're afraid it will contradict what they've already made up their mind to do. But the Bible isn't a dialogue between God and us. It's a revelation from him to us. The Bible should be our guide to life, not a sometimes-support for our pre-existing belief system. (71)

© Becky Laney of Operation Actually Read Bible
Posted by Becky at 12:13 AM

Good review, you expressed good points in the negative part.
People would rather read a fiction book than something, or anything, that makes them have to think, many are lazy. I know few Christians that read their Bible. Sad but true.

It makes me sad that people who call themselves Christians are unwilling to read the Bible. I think prayer can change things--well, it's the Spirit that changes things, but still! I think in some ways Bible reading is a discipline--a "good" habit to be formed. It takes diligence and consistency, and you may not "want" to for the first few weeks. But I think love and desire can come when you open your heart and mind to God.